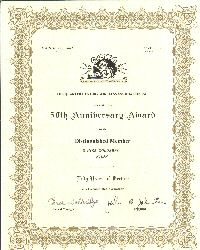 Mike Goldberg, K1LJN received the Quarter Century Wireless Association‘s 50th Anniversary Award at a meeting of his home club, the Billerica Amateur Radio Society on May 2, 2007. Presenting the award to Goldberg on behalf of QCWA was Bob Veth, K1RJV.

Goldberg, a native of Chelmsford, was first licensed while serving in the military in 1950. He has held a number of positions during his long, distinguished electronics career, including stints at National Radio, Tektronix, WGBH and WHDH. Goldberg is active in SKYWARN, and the FCC Amateur Auxiliary (OO) program. K1LJN currently serves as ARRL’s Official Observer Coordinator for Eastern Massachusetts.