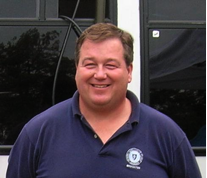 CAPE COD, MA June 28-29, 2008–Every year since the mid 1980s, the Central New England Chapter of the Multiple Sclerosis Society has held a bikeathon to raise money to help fight the deadly disease of MS. Before there were cell phones, there was a group of people who, at one time, were a part of Metro Motorist Aid REACT Team in the Boston/South Shore Area. They used CB radios and went to GMRS when introduced by the FCC. After a few years, more and more individuals were obtaining their Amateur Radio licenses to better support the ride. The ride has gone through a few name changes. The latest was from the Great Mass Get-a-Way to the present name of the Cape Cod Get-a-way. The event is a two-day event starting in Quincy, MA and ending on day two in Provincetown, MA with a mid-stop over night stay (and party) in Buzzards Bay, MA.

Shown here: John Mahon, N1PYN
The Cape Cod Get-a-Way (CCG, formerly Great Mass Get-a-Way) would leave Marina Bay in Quincy on the fourth Saturday of June at 7 a.m. Cyclists would pedal through the towns across the South Shore, most of it right along the coast, taking little back roads and side streets with rest stops every 15 to 20 miles. After the lunch Stop in Duxbury (Rest Stop #3), the route would split.

Back in the mid 80s and early 90s not everyone had cell phones, and there weren’t many GMRS repeaters that provided adequate coverage for both routes. With so many miles to cover, and an increase in the number of cyclists, John Mahon, N1PYN saw the need for assistance in communications. The help came from Amateur Radio operators. He proceeded to recruit amateur operators from the area, as well as encourage his wife Tina, KA1YAY and close friends Jim, KA1YCV and Steve, KB1NMJ to get their amateur licenses. The introduction of amateur radio to the event was a big success. Since then, a countless number of GMG/CCG volunteers, as well as several MS Staff members, have become amateur operators.

MS Volunteer Coordinator Brenda Barbour, KB1MVJ was always proactive to raise awareness of our effectiveness and the need for additional amateurs for this large-scale event. The biggest obstacle is that the MS Bike Tour usually falls on the same day as the ARRL nationwide Field Day weekend due to scheduling conflicts at Massachusetts Maritime Academy.

Mahon, a member of the Genesis Amateur Radio Society in Plymouth, MA, has just completed his 20th year with the event. He began preparation for the ride several months prior to organize the hams for the tactical net and would coordinate the use of repeaters [Norwell AC1N Repeater, 145.25mhz; Plymouth 146.685 now owned by Genesis ARS, formerly was run by the Mayflower ARC, Falmouth 146.655, Dennis/Yarmouth Repeater (146.955) and the now former Provincetown Repeater (147.255)]. He would also coordinate some of the 440 MHz repeaters for the event (now they are all shut down due to PAVE PAWS) for tactical operations to coordinate immediate attention to major problems.

John & Jim would venture out and test repeater coverage from all checkpoints on both routes, adding extra markings so the riders would not get lost and test strategic route locations to ensure reliable coverage. On the day of the event, amateurs would setup their mobile stations at check points and John would “SAG” the route as he maintained net control operations.

As more and more riders joined, cell phones became more popular and some cyclists were using FRS Radios, there were still too many holes to maintain 100 percent effective communications. This is where Amateur Radio was proven to be the best effective method of communications for the bike tour. John created a friendly environment for the newest of the operators, instructed and guided them, sometimes on the air in a polite matter of fact manner that kept the net comfortable & professional. Event participants, staff & volunteers, seeing the camaraderie, friendly and very effective benefits of amateur radio, started to get their amateur licenses (John Siemiatkoski, Tour Director, KB1MOW) along with many, many others). We also have a motorcycle crew member with his ham ticket (Ross Chapman, KB1MGD). Through his efforts of showing the need for Moto-Crews to communicate, the number of these members with their amateur ticket has grown as well. We are still working on it, but every year, a few more individuals became licensed to join the ranks. To date, John’s efforts have resulted in over 20 new amateurs just for this event.

Finally it had arrived that the 2008 Tour, this year known as the Cape Cod Get-a-Way, had a new Net Control. So, after 20 years of being the MS Bike Tour Net Control, Mahon and his wife Tina, KA1YAY, the tour’s former Medical Director, decided to step down and pass the reigns to someone else. They remain involved by filling SAG, medical and Checkpoint assignments.

Again John, thanks for a job well done & best of luck with all of your future endeavors.