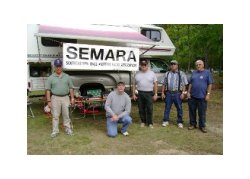 Members of the Southeastern MA Amateur Radio Associaton demonstrated Amateur Radio at a Friends of the Forest outing in the Freetown-Fall River State Forest on September 26, 2010.

The demonstration featured an operational ham station on HF with a long wire antenna, along with 2 meters, 220, 440, and 900 MHz. A large camper with solar power was supplied by W1BEP; it sported the SEMARA club banner.

Club members made on-air contacts, and “spoke with a lot of people about the hobby.”