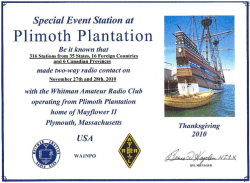 The Whitman Amateur Radio Club has produced a special edition of its newsletter, The Spectrum, highlighting the club’s special event operation from the Plimoth Plantation November 27-28, 2010.

According to WARC President Paul Burbine, N1VTI, 33 WARC members — along with one area ham — helped set up and operate HF and 2-meter stations using portable antennas at the famous re-creation of the 17th century Pilgrim settlement and Wampanoag Indian homesite. “The crew exchanged contacts with 316 other amateur radio operators in 35 states, 16 foreign countries and 6 Canadian provinces,” Burbine reports.