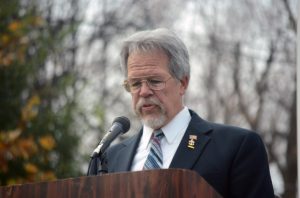 Retired Veterans Service Officer Terry Stader (KA8SCP) has been named the Kiwanis Person of the Year, an annual award bestowed on members of the community who have made significant contributions.

Stader has always had a strong commitment to giving back, whether serving his country or serving his community. Early in his career Stader was Senior Chief Petty Officer for the Navy. During his time in the Navy he was decorated with many awards including the Navy Commendation Medal with gold star and the Navy and Marine Corps Achievement Medal with gold star. He was also named Sailor of the Year for Naval Reserve Readiness Command Region One. This set the pace of hard work and commitment to public service that brought Stader and his family to Westford in 1993. [Full story]

(Terry Stader is a member of PART of Westford, and serves as an ARRL District Emergency Coordinator.)