Massachusetts ARRL staff received copies of proclamations and resolutions congratulating the Amateur Radio community for its service to the Commonwealth, and for the upcoming annual Field Day exercise June 22-23, 2019.

The Massachusetts House of Representatives document “offers its sincerest congratulations to the American Radio Relay League in recognition of The ARRL Field Day and the Tireless Work of Amateur Radio Operators.” The document was signed by Robert A. DeLeo, Speaker of the House.

The Massachusetts State Senate weighed in with a resolution, adopted May 9, 2019. “[The Senate] extends its appreciation to Amateur Radio operators as they celebrate Amateur Radio Week and Field Day.” The resolution was signed by Senate President Karen E. Spilka and Michael D. Hurley, Senate Clerk. It was offered by Senator Bruce E. Tarr (N1UIU), who represents the 1st Essex and Middlesex District.

Copies of the documents will be delivered to Tom Walsh, K1TW, and Ray Lajoie, KB1LRL, ARRL Section Managers for Eastern and Western Massachusetts, respectively; and to ARRL New England Division Director Fred Hopengarten, K1VR.  K1TW plans to bring the copies with him for display as he tours various Field Day sites around the section. 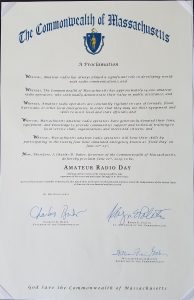 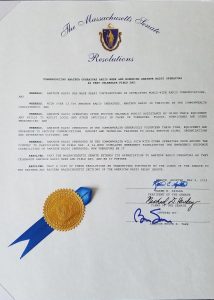 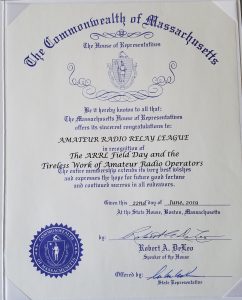