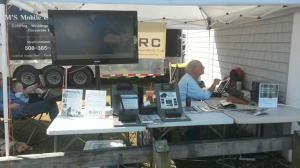 BARC set up a special event station K1PBO at the festival entrance to promote Amateur Radio to greet festival attendees.  A large-screen television displayed locations contacted around the world. Magazines and other items were handed out to the public.

Many BARC members helped to make the event a success.  Al Ryan, WW1RF, served as event liaison while Mark Avery, N1ZPO, provided technical coordination. (Mark’s son, Charlie, and puppy Remi roped in many passers-by). Russ Apgar, K1RTA, provided the tower trailer while Mark Petruzzi, WA1EXA, Norm Cantin, WA1NLG, and Rob, Leiden, K1UI, handled the on-the-air communications.  WA1NLG and Mike Lobay, W1MLL, along with the on-the-air crew helped with the setup and tear down of the station.  The crew completed several hundred contacts, including over eighty in the WAE contest.  –Thanks, K1UI 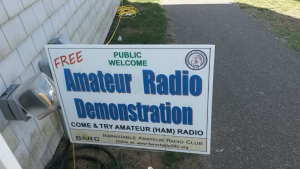