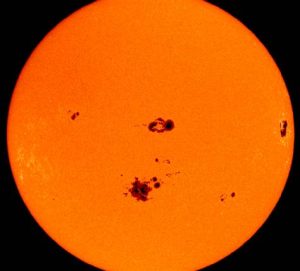 The NOAA/NASA-co-chaired international Solar Cycle Prediction Panel has released its latest forecast for to forecast Solar Cycle 25. The panel’s consensus calls for a peak in July 2025 (±8 months), with a smoothed sunspot number of 115. The panel agreed that Cycle 25 will be of average intensity and similar to Cycle 24. The panel additionally concurred that the solar minimum between Cycles 24 and 25 will occur in April 2020 (±6 months). If the solar minimum prediction is correct, this would make Solar Cycle 24 the seventh longest on record at 11.4 years. In its preliminary forecast released last April, the scientists on the panel forecast that Solar Cycle 25 would likely be weak, much like the current Cycle 24. [Full story]