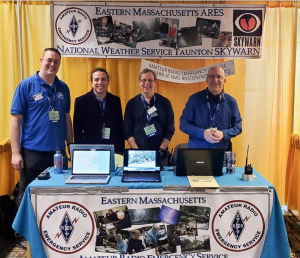 On Sunday, January 12, 2020, ARES/SKYWARN for Eastern Massachusetts and WX1BOX of the National Weather Service Boston/Norton office were represented at the 19th annual Weatherfest component of the 100th annual meeting of the American Meteorological Society (AMS).  The Boston Weatherfest event was free to the public and very well attended.

The ARES/SKYWARN group were in good company with approximately 50 other exhibitors including NASA, The Blue Hill Observatory, The Mt. Washington Observatory, NOAA, The National Weather Service, New England Sci-Tech, local news stations, multiple universities as well as industry leaders in climate and environmental research and reporting.

Section Emergency Coordinator Rob Macedo, KD1CY; District Emergency Coordinator Jim Palmer, KB1KQW; Matt Goldstein; and Assistant Section Manager Stu Solomon, W1SHS, manned the ARES/SKYWARN booth and spent the day speaking with weather enthusiasts young and old.  Not only were they able to promote the importance of the SKYWARN program and the part it plays in assisting the weather service and emergency services with realtime, on the ground weather and damage reports, but also the important role Amateur Radio and its dedicated volunteer operators also play.  On display in the SKYWARN booth were computers with real time displays of current incident reports (it was a day of high winds in the Boston area) as well as videos of past storms and the damage resulting from them. Good questions were asked by the many people that stopped by with numerous folks signing up to receive SKYWARN emails as well as information on upcoming SKYWARN training.