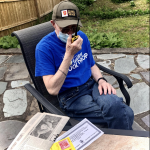 Taunton amateur Ted Figlock, KA1AAT, was the subject of a nice feature story in the June 24, 2020 edition of the Taunton Gazette:

TAUNTON – Dr. Thadeus “Ted” Figlock has been a world traveler for the better part of six decades.

And he’s done most of it from a sitting position.

The 85-year-old, former obstetrician and gynecologist, who unpretentiously describes his medical career as having consisted mainly of “delivering babies and cutting out tumors,” has had a difficult year.

Figlock says he suffered a stroke last February, on Ash Wednesday to be exact, that hit him “like a ton of bricks.” He says he also suffers from the lung disease known as pulmonary fibrosis.

Despite those maladies the Hudson, Pennsylvania, native continues to keep active as an amateur radio operator.

“You do it for the fun of it,” Figlock said during an interview in the backyard of his Winthrop Street home.

“It’s like fishing,” he said. “We go out fishing for people who want to talk to us. It’s a sport.”

Figlock didn’t stop working as a doctor after he closed his practice. He says he worked a while at both the Jamaica Plain VA Medical Center and at a medical marijuana facility in Fall River.

His enthusiasm as an amateur radio operator, or ham, has not wavered, despite adjustments to his routine stemming from his medical challenges.

Figlock used to spend solitary time on his ham radio in a small room of his basement. He no longer ventures down the stairs and instead uses a second setup located on the main floor of his house, which is equipped with two antennas.