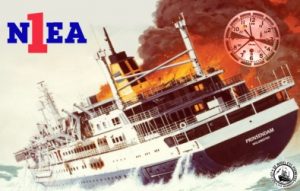 David J. Ring, Jr., N1EA, writes on Facebook on October 4, 2020:
The hand of God watched over them and a miracle happened, 40 years ago tonight.
I was woken up by auto alarm bells from the SOS of the burning luxury liner MS PRINSENDAM / PJTA as my ship was sailing southward from Valdez, Alaska on Prince William Sound. When the burning ship lost main and emergency generators, their radio officer told me to take over and I sent out three additional DDD SOS DDD (MAYDAY RELAY) calls.
The FCC in Washington reported over 350 ship logs were received. According to RCA San Francisco / KPH senior operator Hansen who copied my handling of the SOS in Morse, he’d been there for 35 years and never heard a finer job of communications. All 535 passengers and crew were rescued safely from lifeboats without even one death. The rescue was greatly helped by the international cooperation involved: the United States Coast Guard, United States Air Force who supplied two rescue swimmers (at that time USCG didn’t have that speciality), Canadian Armed Forces who supplied massive long range helicopters able to fly 300 miles out to sea, and engage in hours of rescue work by lifting survivors out of lifeboats one at a time and dropping them on: my ship, the SOHIO INTREPID, USCG cutters Mellon, Woodrush and Boutwell, United States Merchant Marine and foreign Merchant Navies, including the men and women on Ocean Station PAPA / 4YP manned by Canadian Coast Guard. US Air Force also sent a flight surgeon physician.
Because the distress was handled on long range 500 kHz radiotelegraphy, communication with Rescue Coordination Center Juneau, Alaska was instantaneous. Sitting at RCC was a USCG radioman who tuned in 500 kHz and copied the Morse, beating the interoffice teleprinter circuits by five minutes. The City of Sitka, Alaska sent two paramedics. Automated Mutual-Assistance Vessel Rescue System on Governor’s Island, New York City sent SURPICS telling us what ships were in the area. Such beautiful cooperation! Morse XXX and SOS recordings, radio logbooks from WILLIAMSBURGH and EXXON NEW ORLEANS / WNDM whose Radio Officer, Richard Singer provided his excellent assistance as did Radio Officer, Carl Williams on SOHIO INTREPID. Hundreds of people were involved in what has been called “The Greatest Air-Sea Rescue in history.
See the Internet Archive for more: https://archive.org/details/SosMsPrinsendamOctober41980.