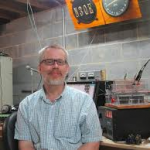 Tim will explore not just the modern range of speeds (typically 20-40 WPM but some are slower) and will play back some recorded audio of CW preserved from the 1957 ARRL DX Contest for contrast with modern contesting.
It will only be a tiny fraction of the whole talk to play back the ancient audio, but it’s really neat to hear famous contest calls from the 1950’s booming through loud and clear, many using a straight key or even having a bit of chirp.
Also noticeable in the 1957 archive, most speeds were 15 WPM or so (some were above 20 WPM), most everyone was giving honest RST’s, and full “HIS CALL DE MY CALL 579 579 MASS MASS KN” with prosigns etc being used. It’s quite a contrast with everyone being 5NN now, and prosigns not generally being used today.

Included in the survey of speeds is, of course, the SST’s 🙂
Presentation is not long, under half an hour. There will be opportunity for Q & A followup. The session will be recorded for upload to our K1USN radio Club YouTube channel.
If anyone would like to attend, they just need to send me an e-mail (k1rv@arrl.net) and I will be sending out invitations starting on Sunday, Jan 31st. As always, we ask that the Zoom login information not be shared with others to help us minimize the possibility of “Zoom Bombing”.
By the way, anyone who has previously signed up for K1USN Zoom sessions is already on the invitation list.