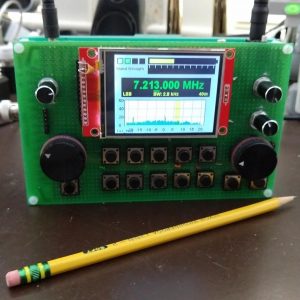 In this talk, Derek will describe his multi-year project to develop the hardware and software for a stand-alone SDR system using the “Teensy” family of microcontrollers from PJRC.  In particular, it uses the Teensy Audio Library structure, hence its name “AudioSDR.”   The software is now freely available from GitHub.

Derek will describe the origins of the project from a graduate course he was teaching in 2010, and how it was not initially intended for ham radio, but rather as an exercise in applied DSP (digital signal processing).   He will describe in very broad terms the structure and operation of the system.    Math will be kept at a minimum.

The talk will also cover the associated hardware for the RF front-end and the LCD display, as well as how the system is controlled, and the software structure for the Teensy Audio Library coding.   We will look at (extremely) over-simplified seudo-code to demonstrate concepts of real-time software.  We will write such code for an SDR version of the humble crystal-set – the simplest of all radios.

Derek will also discuss current developments and future enhancements for AudioSDR, including the addition of a transmit function to make it a true transceiver.

If feasible we will have a demonstration of the operation, or at a minimum, pre-recorded sound clips of the output.