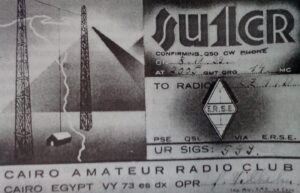 Boston Globe reporter Gabriella Gage writes this nice human interest story in the May 22, 2012 issue of The Boston Globe:

“On a rainy October night during the pandemic, my husband, David, searches for a faint voice in the distance. He doesn’t know who’s calling, but he knows he wants to speak to them. David adjusts the tuning knob on the decades-old transceiver ever so slightly, as if cracking a safe. Outside, a homemade antenna bobs in the wind. On his computer, pulsating lines tell him the voice is one of hundreds calling out on this busy night. The voice gets clearer: ‘CQ,’ the magic letters he’s been awaiting — the amateur radio operators’ invitation for a response — followed by a call sign. David jumps on his mic, repeating the stranger’s call sign and adds: “This is KB1TOY, Kilo-Bravo-1-Tango-Oscar-Yankee. You’re light but I can hear you!”  [Full story]