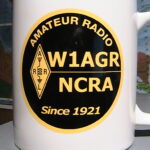 The Norfolk County Radio Association is celebrating its 100th anniversary this year with a special event operation from 0000 UTC June 5 to 2359 UTC June 12, 2021 on the suggested frequencies of 3.825, 7.225, 14.235, 21.285, and 28.325 MHz as well as other frequencies at the discretion of club members.  Club members will operate their own stations using the club call W1AGR during this operating event. A special QSL will be available with an SASE to the club station trustee, K1HC, 422 Everett Street, Westwood, MA 02090.

The club had its beginnings in Norwood, MA in 1921 when a group of young radio amateurs gathered to exchange ideas and help each other build their home-made radio equipment.  It originally became affiliated with the ARRL two years later, in 1923.  The club grew to include hams from local area towns and then re-organized in 1932, calling themselves the Norfolk County Radio Association.  The spirit of those early years continues today; its members are always ready to help others and mentor new hams getting started in amateur radio. NCRA members have made memorable contributions to amateur radio in technology and communications, including support for various public service needs such as municipal events, SKYWARN reporting, Red Cross, and local disaster training.

Congratulations to the Norfolk County Radio Association for reaching this historic milestone.