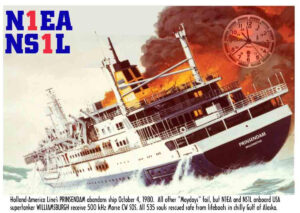 The New England Sci-Tech Amateur Radio Society presents, “”Radio Officers in the U.S. Merchant Marine and Commercial Radiotelegraphy” by David J. Ring, Jr., N1EA on June 22, 2021 at 7 PM.
This talk will be about being a radio officer in the United States Merchant Marine, and commercial radiotelgeraphy, with mentions of the SOS in which David was involved in 1980. This event concerned the fire and abandoning of passenger cruise ship MS Prinsendam, call sign PJTA (Netherlands Antilles), in the Gulf of Alaska on October 4, 1980. The Prinsendam was on fire and burning out of control when James N. Pfister, NS1L, and David J. Ring, Jr., N1EA, both Radio Officers on the USA flagged ‘super-tanker’ Williamsburgh (Call Sign WGOA), picked up her SOS.

David Ring was first licensed in 1965 as WA1DRS, upgraded to Amateur Extra in 1967 to avoid the necessity of relearning all the subdivisions, obtained secondary call N1EA in 1978, and when the FCC dropped secondary call sign assignments, kept N1EA. He holds FCC First Class Radiotelegraph, and First Class Radio Telephone Licenses and worked in broadcast and at Marine Coast Stations. He also holds a U.S. Coast Guard license as Radio Officer, and sailed from 1980 until 1993 as a Merchant Marine Radio Officer. He also worked at maritime coast station WSC in West Creek, NJ and at various broadcast stations in the Boston, MA area. In 1980 while serving on the USA flagged tanker “WILLIAMSBURGH,” Jim Pfister, NS1L and David Ring, N1EA, answered an SOS from the passenger ship PRINSENDAM, a Holland-America cruiser bound for the Orient which was burning out of control south of Valdez, Alaska, in the Gulf of Alaska. All 535 passengers and crew members were ultimately rescued from lifeboats from the chilly waters of the Gulf. In 1988, Jim Pfister and David Ring were awarded the VWOA “Marconi Gold Medal” for their work during this rescue.