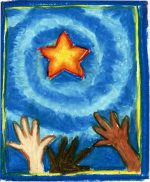 “I came up with the idea of an ‘Amateur Radio Funshop,'” said W6HJC. “I scheduled three hours to show off ham radio in a ‘non-teacher’ kind of way. We are unschoolers.”

Colburn enlisted some local help from Rick Meuse, N1HID. “Rick brought with him his portable satellite antenna. Unfortunately, there were no good passes that day,” remarked Colburn, who added, “next time perhaps we can set up an ISS contact.”

“In a word [the funshop] was great,” concluded W6HJC. “Hopefully it will be much better the next time around.”