The Eastern Mass Hospital Net will be conducted this Saturday December 1 commencing at the usual time of 10am. The Net this month will be run from the South Coast led by Ed Caron KA1RSY.

We have made a change to the repeaters and simplex frequencies used for the net. Starting in December we will including the Falmouth N1YHS in our repeater rotation thanks to the generosity of Ralph Swenson N1YHS.  The Falmouth repeater is on 147.375 with a tone of 110.9. Additionally, due to a lack of participation on the Danvers & Salem repeaters we are temporarily removing these repeaters from the list as well as the simplex frequency of 146.565.

We are also reducing the number of repeaters used during the net. Rather than including all of the systems we have available, we instead are going to start rotating the repeaters used monthly with Net Control for that month determining which systems they would like to use. This will allow for a shorter net while at the same time testing all of the available systems.

If any group or organization would like to run the Net from your facility and be put into the Net Control rotation please let us know. It would be great to rotate this duty among several groups.

We are happy to announce that The Falmouth Amateur Radio Association has their equipment in place at Falmouth Hospital and will be joining the net.

We would like to extend an invitation to the EOC of any city or town that is served by one of our participating hospitals to join the Net. During an event it is quite likely that these locations will be activated, and the need to communicate with health care facilities via amateur radio may be a real possibility. Any hospital not currently part of the net is welcome to join. If you are unable to join due to a lack of equipment or personal please contact us or Carl Aveni at caave@peoplepc.com for assistance in getting your location on the air.

The following repeaters will be used in the order listed starting at 10AM unless otherwise announced at the beginning of the Net. If you can not reach a specific repeater please monitor the next system in the rotation and wait for the net to arrive. If you lose contact with the rotation and are not sure where the net is currently located, South Shore Hospital will also be monitoring the the Plymouth Repeater during the Net. You can check back with them on Plymouth and ask where the Net is currently located.

When asked to check into the Net by Net Control please use the standard net check in procedure which is: Here is.., un-key, wait 3 seconds to check for doubling, then give your call sign, First Name, and facility or group represented.

The Net will return to the Plymouth repeater for final comments and net closing. 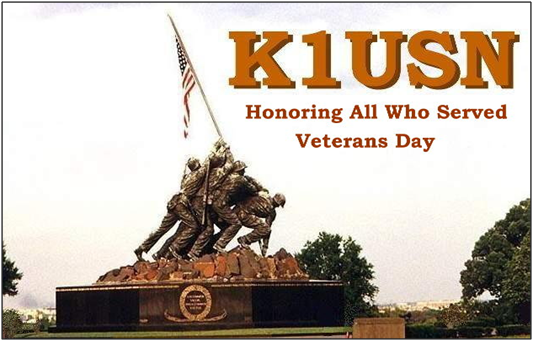 The K1USN Radio Club plans to put the K1USN station on the air on Veterans Day, Sunday, November 11, 2012 to honor veterans and acknowledge their service to the country.

“We have done this most years on Veterans Day and K1USN is always well received on the HF bands,” according to K1USN’s “Pi” Pugh, K1RV.

The club will operate several HF stations on the air from 9 AM until approximately 3 PM.

K1RV invites folks to come and operate, or “just to drop by for coffee on Sunday.”

The Saturday morning prior, club members will meet at Jamie’s Restaurant in Braintree, and later at K1USN for their VE exam session and to get the HF stations ready Sunday’s operation. 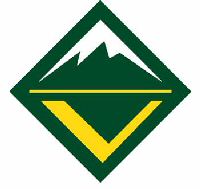 Venture Crew 47 members plan to participate in the Tri-District Camporee at Woodsom Farm in Amesbury on November 11-13, 2012. The KB1PAL crew will operate on Amateur Radio frequencies as well as FRS and GMRS during the event. Frequencies include: 147.57 simplex, 147.42 simplex, and FRS/GMRS Channels 3 and 5. They’re encouraging all participants who are licensed amateurs to bring their radios and contact Tri-District Control.

In existence since 2006, the Peabody-based Venture Crew 47 young amateurs are supported by the North Shore Radio Association. They have participated in numerous events including the Head of the Charles Regatta, HF contests, and Field Day.

A reminder that the monthly ARES Net for November is rapidly approaching. The monthly ARES Net for November is Monday November 5th, 2012, at 8:30 PM on the MMRA Repeater system. This is after the MEMA Nets earlier in the evening. For frequencies that will be linked into the ARES Net on the MMRA Network, please see the following link from the MMRA web site detailing the repeaters that will be linked in through Hub 1:

Having received ARES standdown messages from the Southern New Jersey and Connecticut sections, Eastern Massachusetts ARES has lifted the standby for the possibility of Amateur Operators deploying in an ARESMAT to the New Jersey, New York City/Long Island and Connecticut sections. We thank all those who offered their availability for this potential and we appreciate the fact that people gave availability and did not self-deploy to the area. Please see the link below where it was requested from the most impacted sections NOT to self-deploy to the affected area:

As we summarize this storm, it is hard to believe that with close to 400,000 power outages across the Commonwealth of Massachusetts caused by Hurricane Sandy at the height of the storm that we would being saying, ‘we are lucky’ but comparatively with the New York City area and New Jersey, we were indeed lucky. Hurricane Sandy prompted an Eastern Massachusetts ARES stand-by and the staffing of the MEMA Region Two Bridgewater facility, various city and town Emergency Operation Centers (EOCs), shelters, and Red Cross chapters as well as SKYWARN activation with Operations at the Amateur Radio Station at the National Weather Service in Taunton, WX1BOX. Several hundred reports of wind damage, storm surge flooding and wind measurements were received and put into NWS Taunton Forecast products on Monday October 29th. Some of the wind measurements, which exceeded hurricane force in wind gusts, were even put into National Hurricane Center advisory statements as WX4NHC, the Amateur Radio Station at the National Hurricane Center was also active for Hurricane Sandy interfacing with Eastern Massachusetts ARES and SKYWARN operations along with other operations in the mid-atlantic and Northeast US region. The storm’s impacts were largely over by late Monday Night 10/29 but a rogue line of severe thunderstorms associated with ‘Post-Tropical Storm Sandy’ caused a microburst in the Wareham/Onset Massachusetts area and scatttered wind damage, flash flooding and even large hail over other parts of Eastern Massachusetts on Tuesday Evening October 30th, 2012 prompting a self-activation of SKYWARN.

To close, there is a potential for a nor’easter to impact the region in the Wednesday to Thursday timeframe. This storm could cause some impacts to the region but at this time, the impacts are expected to be far less than Hurricane Sandy but will be monitored for any increased potential of causing more issues than currently expected. This storm could prompt a SKYWARN Activation with Ops at the NWS Taunton Amateur Radio Station, WX1BOX, later this week.

Thanks to all for their continued support of Eastern Massachusetts ARES! 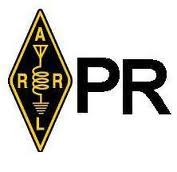 Hurricane Sandy has blown by now, leaving destruction and pain behind in parts of the Eastern Massachusetts Section. Hams are known to have supported much of the preparation, duration and recovery, but how did the general public get to know this?

Such news gets to us hams and we revel in the participation (even if it is standing at alert) of fellow hams. Was the rest of the population made aware of our service?

If you know that ham activity associated with this storm was covered on TV, radio, online, in newspapers, or any of the public media, please send a message to the Section Public Information Coordinator (PIC), Bob Salow, WA1IDA, at wa1ida AT arrl DOT net. If possible, include links or copies of such publicity. If press releases had been sent (a wise move), and actually used in informing the public, make a note of this.