I have had requests to send welfare inquiries into Puerto Rico and have been sending these NTS messages via pactor to Florida where under normal conditions there has been regular contact with Puerto Rico for the relaying of messages.  Because of the extreme devastation however I was informed by a Florida operator that the following information provided by the Weather Channel is being used to inquire about status of residents of PR.  I suggest folks try either that or the Red Cross Safe and Well site, URL listed below. While we will try to get information via NTS, please understand that it may not be possible under the circumstances.

PR’s Federal Affairs Administration:
Email: maria1@prfaa.pr.gov
Call: 202-800-3133 or 202-778-0710
Please provide your contact info and share as many details as possible.
Please send only one email, no follow-ups 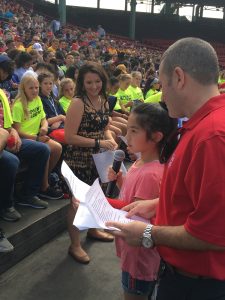 The Red Sox 2017 STEM Day at Fenway Park in Boston, MA drew over 2,500 students from schools in every New England state, including schools in low-income areas. Some students traveled a day early to ensure they’d be there on time.  The Red Sox had been sending various STEM education materials to all schools.

A tweet from the Italian Space Agency / ISS crew member and amateur radio operator Paolo Nespoli, IZ0JPA: “One astronaut and 2000 future ones! Had fun talking with you all!”  Fenway Park also tweeted, resulting in 26.5K tweets, 305 following, and 514 followers. Dan Barstow from CASIS was at Fenway and moderated the ARISS radio contact.

It saddens us to hear of the passing of Joe O’Brien K1LCQ last January 9, 2017.  Joe was for many years an icon of the East Mass Two Meter Traffic Net, holding the position of Friday night NCS for at least 30 years before becoming ill last year.  When I first upgraded to General class from a Novice in 1982 Joe was on the Boston repeater reliably every Friday and always signed off with “88s to the ladies”.  We will surely miss him.  RIP Joe and 73 from the gang on EM2MN

MEET JOE O’BRIEN K1LCQBorn June 28, 1926 in Jamaica Plain. Graduated from St. Ann’s School Neponset June 1939. Graduated from Mechanic Arts High School (now Boston Tech) June 1943. Served US Army Air Corps as a bandsman and also a broadcaster on the base Armed Forces Radio Station at Fort Pepperell Newfoundland, August 1945 to December 1946. Played the trombone in the Army and also locally with American Legion Bands, but I was a lousy trombone player.Upon return to civilian life I worked for phone company 1947 – 1949. Joined the City of Boston Public Works Dept. in 1950 and later the Boston Water and Sewer Dept. until retirement in 1996. The last 15 years of which I served as their Radio Dispatcher and was responsible for keeping their repeaters in operating condition, working with FCC licensed contractors.Joined the ranks of amateur radio June 10, 1959 as a tech and operated six meter AM. Upgraded to General Glass and Advance class a few years later. At that time Hams took their exams in the FCC Office at the Custom House Building in downtown Boston. Joined EM2MN back in the days when it was on 145.800 using AM emission before we had FM and repeaters. Had to use Beam Antennas to communicate and pass traffic. That was back in 1978. Have been NCS on EM2MN on Friday nights for 25 years.

The following is a link to Joe’s obituary.

Please note we are delayed one week due to Labor Day. Also all ARES, SKYWARN, RACES, and other folks are advised to keep an eye on Hurricane Irma. It is too early to say where it will go, but a hit on the eastern seaboard is not out of the question. Now is a good time to revisit your emergency go kits and other supplies as hurricane season is upon us, and eventual preparation for the upcoming New England winter season.
Hello to all…
We will be continuing our monthly ARES Net in September. The monthly ARES Net for September is Monday the 11th, at 8:30 PM on the MMRA Repeater system. This is after the MEMA Nets earlier in the evening. For frequencies that will be linked into the ARES Net on the MMRA Network, please see the following link from the MMRA web site detailing the repeaters that will be linked in through Hub 1:

As part of our relationship with MARS and our own situational awareness gathering we will be asking for any known infrastructure issues that you are aware of. The information must either be personally observed, or obtained “over the air” via amateur radio. Items considered to be infrastructure include but are not limited to: electrical power, water, medical facilities, sanitation, communications, and transportation. Examples of failure would be: small or large area power failure, water main breaks, hospitals’ ER closed, sewage issues, TV/radio station off the air (including public safety), interstate highway or major road closed. No known issues are just as important as reporting failures.

Additionally we are interested in relay of any weather information from airport ATIS/ASOS stations that you can directly receive via radio. These stations broadcast continuously in the 120.000 – 138.000 MHz frequency range using amplitude modulation. Information from the ATIS should include airport, temperature, altimeter (barometer), wind, precipitation, and visibility.

A list of stations with their frequencies and a map can be found at: https://www.faa.gov/air_traffic/weather/asos/?state=MA

We will have several interesting announcements for the net that evening and we look forward to everyone’s participation. Updates will be posted via email and on the Eastern Massachusetts ARES Web Site at http://ares.ema.arrl.orgThanks for your continued support of ARES!Marek Kozubal, KB1NCGEMA Section Emergency Coordinator

Speaking on:
How the Amateurs Created Commercial Radio… and what happened after that

Today, people can listen to radio in a number of ways– online, in the car, at home, even on their smartphone. But there was a time in the early 1920s when radio was new, and there was only one way to listen– in your “radio room.” In those early years, one group of people helped to keep your favorite stations on the air– ham radio operators.

Join media historian, professor, and former broadcaster Donna Halper on September 18th, as she brings along her rare radio memorabilia and takes you back in time. She will introduce you to some pioneering hams who kept a foot in both amateur and commercial radio (without them, there would have been no stations like WBZ or WEEI or the first station in Massachusetts– 1XE/WGI).

Dr. Halper will also share some interesting facts about the history of Boston radio, including why radio today isn’t as good as what many of us remember from when we were growing up. And she will tell you about some performers and announcers who came from the North Shore.