The Nor’easter brought the advertised 3-5″ of rain across Southeast New England with 1.5-3″ rainfall amounts common in Southern New Hampshire, Central and Northeastern Massachusetts. This produced some urban and poor drainage flooding and caused small rivers and streams to rise to near or just short of bankful. Winds briefly kicked up around the coast with 40-50 MPH wind gusts across East Coastal and South Coastal Massachusetts and Cape Cod and the Islands. One report from an elevated wind platform at 60 feet in Horseshoe Shoals had a wind gust of 53 MPH/61 Knots associated with the storm. The winds were brief and were likely convective in nature except for some backside winds reported in some areas between 5-6 PM Saturday Evening. Rainfall and wind reports can be seen via the links below:

The Kennedy funeral also went flawlessly and without incident in Boston Massachusetts earlier today. The State EOC was operational and secured at 2 PM for this event and for the nor’easter storm that affected the area. Once again, thanks to all who supported the stand-by mobilization and thanks to all for their continued support of Eastern Massachusetts ARES!

I need several more hams to help with the Jimmy Fund Walk Sunday Sept. 13. This event is run on the Boston Marathon course and runs for most of the day. The majority of the activity is on the last half of the course. We have hams on the buses like the Marathon and a ham at each first aid/water station. This is a low key activity. We use 2 meters for this event.

With the impacts of Tropical Storm Danny and his interaction with a frontal system potentially bringing 3-6” of rainfall and the potential for strong to damaging winds near and just inland from the coast coupled with the fact that there are a significant amount of dignitaries present for the Senator Kennedy Funeral, Eastern Massachusetts ARES will be placed on stand-by to cover the storm and potential flooding and damaging wind issues as well as any exigencies with the Senator Kennedy funeral.

While the intensity and track of Tropical Storm Danny is uncertain, there remains the potential for flooding rains and strong to damaging winds as Danny interacts with a couple other approaching storm systems. There is the potential for a strong hybrid system to bring 3-6” of rain and strong winds of 50-60 MPH on Cape Cod and the Islands and 40-50 MPH along East and South Coastal Massachusetts. While this would normally be handled simply as a SKYWARN Activation, there is an outside chance of something stronger and that needs to be watched. This coupled with the fact that we have a large number of dignitaries in the Metro Boston area for the Senator Kennedy funeral means we should be alert for any issues that could occur with the storm or the funeral or a combination of both events.

We will activate the town of Bridgewater EOC as the Eastern Massachusetts ARES Incident Command Post. We will also activate the Acushnet EOC over the course of the day Saturday to assist with storm reporting and monitoring any other exigencies pertaining to the Kennedy funeral.

We’d like to have ARES personnel assist with SKYWARN reporting of flooding of rivers, streams and urban areas as well as any wind damage. Keep your situational awareness level high from any updates from ARES leadership by checking your email for updates and our ares web site at http://ares.ema.arrl.org and monitor local media on the funeral for Senator Kennedy.

What is ARES Stand-By mode?

ARES stand-by mode is to alert Amateurs within ARES that a mobilization is possible on a wide-scale and that some localized mobilizations are or could be taking place in isolated areas. It means to take a look at your Go-Kit and have batteries and equipment ready to go and charged up and take care of any requirements at home in case a mobilization is required and you can participate. Do NOT self-deploy. Wait for guidance from leadership for any deployment. It is an honor to be ready even if you don’t deploy for the event.  Hopefully, this is just another exercise of our preparedness and capabilities. If not, the ARES leadership looks forward to working with you if any wide scale mobilization is required after the impact of this major storm to the region or an issue arises at the Kennedy funeral.

Thanks for your continued support of Eastern Massachusetts ARES!

The Salvation Army Emergency Disaster Services has planned a Field Exercise on Saturday, 26 September at Camp Wonderland in Sharon, MA.  This event will focus on disaster operations training for key members of the Command staff and Volunteers.  We have participated in this event for several years, and ham radio support has been and continues to be a vital part of this exercise.  The drill will simulate a specific, large scale disaster response, and work on building response capacity in a number of different areas.

The drill will begin with registration at 0830, followed by a Disaster Services Organization role-specific training from 0930 to 1030, with the live exercise beginning at 1030.  Lunch will be served from canteen kitchens as part of the drill.  A brief time for assessment is planned before the event is completed at 1545pm.

Communications will be managed from the fully outfitted Communications van as in a realistic situation.  About 20 hams are urgently needed for assignments as shadows for Salvation Army commanders and managers, specific field operations, and at the food and supply locations.

If you are able to participate, or have any questions, please contact me at n1dhw@arrl.net.

This message contains some points with regard to the approach of Hurricane Bill near our area.  Although the impact of the storm appears to be no greater than what we would experience during other times of the year, the storm could be especially dangerous to boating and beach enthusiasts.

I am requesting that you assist our safety outreach in the following ways:

1.    Remind friends and family about the dangers of storm generated surf, which may be especially prudent since the hot weather may beckon people to go swimming.  There are many websites that explain the “riptide” phenomena and safety measures.
2.    Please listen for ham maritime mobile stations and verify they have current storm information.  Please encourage them to monitor the weather radio, and if they tell you they are using a marine radio, remind them to monitor Marine channels 16 (156.8 MHz) and 22A (157.1 MHz).
3.    For those of you on the coast this weekend, please report all flooding and “splash-over” (water carried ashore by crashing waves) to SKYWARN observers.
4.    If you (especially our SKYWARN cadre) are asked by other citizens what you think about the storm, encourage these folks to familiarize themselves with the storm by visiting National Weather Service (NWS) websites, listening to weather radio, and watching TV and web broadcasts.  Remind people that weather safety issues are exclusively the responsibility of the NWS.

Enjoy the rest of the summer!

According to CAARA’s Briggs Longbothum, AB2NJ, “The Fish and Wildlife Service has issued a ‘Special Use Permit’ for the club’s activity at the North Tower.” Briggs adds, “The Thatchers Island Association is being very supportive of our plans.

CAARA intends to stream live video of the operation via UStream from its web site. To view the festivities, visit the current home page at: http://caara.net. 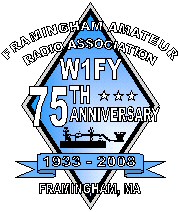 On Sunday Sept. 13, [the Framingham Amateur Radio Association] will be taking part in the CERT (Community Emergency Response Team) and MRC (Medical Reserve Corps) Emergency Readiness Fair at the Peter Noyes School in Sudbury from 12 noon to 3 PM.  There will be other organizations represented as well.

This is a great PR opportunity to inform the public about EMCOMM.  We will be speaking to the public and handing out brochures, etc.

At the request of the Cape Cod Incident Management Team and the Cape Cod Red Cross, Cape Cod ARES provided support for the funeral services of Marine Corporal Nicholas Xiarhos who died in the line of duty in Afghanistan in late July. Cape Cod ARES District Emergency Coordinator Frank O’Laughlin-WQ1O provides his after action report via the PDF document below:

It was an honor and privilege for Cape Cod ARES to participate. On behalf of Eastern Massachusetts ARES, I’d like to thank Cape Cod ARES for their support of this event.

A reminder that the monthly ARES Net for August is rapidly approaching. The monthly ARES Net for August is Monday August 3rd, 2009, at 8:30 PM on the MMRA Repeater system. This is after the RACES Nets earlier in the evening. For frequencies that will be linked into the ARES Net on the MMRA Network, please see the following link from the MMRA web site and the repeaters that will be linked in will be through Hub 1: