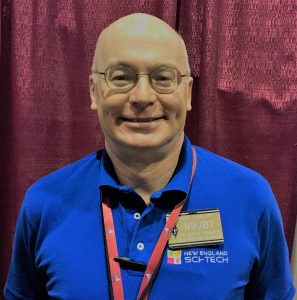 My first interest in ham radio was in high school in the early 1980s.  The high school amateur radio club was a group of old men who apparently had no interest in mentoring actual high school students who tried to join.  I did not get my license there and that club is now defunct.   I was licensed as a novice (KA9QJK) during the summer of 1982 while a counselor at a NH summer camp. I was the computer counselor but the camp had a ham radio counselor and we became quick friends.  I upgraded to Technician (N9FJO) September 1985.

After graduating from Lake Forest College, getting married and moving to the Boston area in 1987, I joined the Colonial Wireless Association (CWA, Lexington/Concord).  I volunteered through CWA for the Walk for Hunger from 1987 until they ended amateur radio assistance. I joined the Amateur Telescope Makers of Boston in 2001, there I had a stint as club Secretary and several years as Member at Large.  It was there I learned about STEM education by participating in many school Star Parties.  My take was different than most, because I took the point of view of “where do we go from here?”

While attending Astronomy Day at the Clay Center Observatory in Brookline in 2005, I was impressed with the astronomy and amateur radio programs being offered there. I quickly became a volunteer there for both astronomy and amateur radio. That was also when I started volunteering for the Boston Marathon, for which I have been a net control operator every year since then.  I upgraded to General and Extra in December of 2011. I selected call sign N9JBT in January 2012.  I was certified as an ARRL VE July 2013 and have participated in about 50 exam sessions since then.  I am the call sign trustee for New England Amateur Radio (NE1AR) and certified for SKYWARN.  Since 2018, I have volunteered for amateur radio at New England Sci Tech in Natick.  Currently, I am educational advisor and station manager for Sci Tech Amateur Radio Society (“STARS”, W1STR) and a mentor for the amateur radio activities there.  I am a long time member of the ARRL.