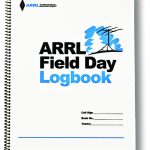 Field Day 2002. For some, it was the culmination of weeks of hard work and planning. For others, it was a wonderful occasion to socialize with old friends and to make new acquaintances. And for many non-hams, the first weekend of summer was their first opportunity to discover what Amateur Radio is all about.

On June 22-23, 2002, members of the Eastern Massachusetts ARRL and ARES staff, including: K9HI, W1MPN, N1VUX, KA8SCP, WA1ECF, N1UGA, AA1MO, WQ1O, and W3EVE traveled throughout Eastern Massachusetts to visit with the many radio clubs participating in the annual radio event. I was privileged to visit personally with ten area clubs. I wanted to share my observations and thoughts about the weekend.  -K9HI

I caught up with t 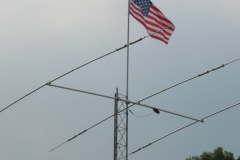 he joint MITRE-Bedford ARC/ Billerica ARS operation at MITRE in Bedford during set up time Saturday morning. Ops were arriving at a steady pace; the site was slowly but surely taking form in the parking garage operating QTH and atop the garage where the antennas and generator were located. Safety was a prominent factor at MBARC/BARS. I observed lots of electrical ground rods, and good safety techniques in force during the set up. The clubs had a nice food table (contributions requested, sliding fee).

The W1ON operation also sent radiogram traffic for extra bonus points later that evening. And the hammock was a nice touch! 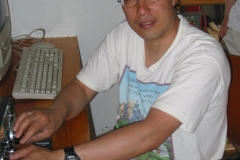 My next stop was Rockport, and the Cape Ann Amateur Radio Association. I was temporarily lost in Rockport, but N1OCT came to my rescue with directions. Soon thereafter, I found CAARA’s signature communications van parked in their usual grassy field off Route 127. W1RK, N1LUA, W1OKD, and others were busy setting up the second operating position. I chatted for awhile with Greg, N1RZR, his son Brendan, N1VTY and a visiting family.

The parents explained that they found some Amateur Radio publications at the local town dump. They were fortunate to find the Field Day so that they could introduce their son to the hobby. While I was there, N1RZR did a wonderful job of explaining basic electricity and amplification to the young man/soon-to-be ham with the aid of a vacuum tube that happened to be nearby. 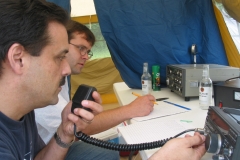 The folks at QRA always have a fun and enjoyable Field Day atop the hill near the Bates Linear Accelerator Center in Middleton. QRA operated as W1EKT in the “3A” category. Their command post is a plush motor home with all of the creature comforts of home. W1HL and crew were busy “pounding the brass” along with two other stations, one of which featured vintage Heathkit gear operated by Tony, KE1HL.The crew at QRA have a lot of Old Timers and hence, a good deal of collective ham wisdom between them. I always enjoy visiting them. 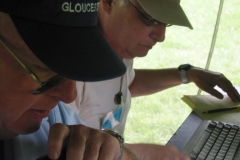 I found NSRA operating again at Endicott Park in Danvers, MA. The NS1RA crew is certainly well-organized. N1UGM and the gang have it down to a science: operating locations and station assembly are carefully choreographed. The various operating locations are dynamically reassigned by exchanging band notebooks at the control table.

I was very impressed by the powerful night time lights installed by Bruce, KC1US. And the food looked very yummy! I declined the offer for lunch, as I had many more stops to make before I could lay my weary head to rest. 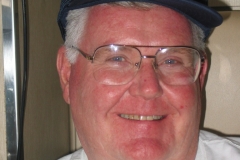 PART has distinguished itself in the area of public service, notably its program of monitoring 52 simplex for roadside emergencies. So, as you can imagine it takes more than a few drops of rain to deter the folks at PART in Westford. I found the K1EJ operation again near the Junior High School close to the town center. Bo and the gang did a bang-up job with a “2A” category operation featuring a satellite station in an official-looking “special operations” police van.

While I was visiting, the crew tried valiantly to contact the International Space Station, but were unsuccessful on that particular pass.

The chili looked exceptional, but I had stopped earlier for a meal and had no room for additional ballast.

KA8SCP alleges that he made the first pot of coffee for PART on Sunday morning. [KD1D—is this true? ;-] 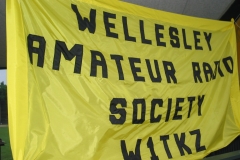 The Wellesley/Needham operation, W1TKZ is situated in downtown Needham in a very attractive gazebo adjacent to the town community center and school. It’s an ideal QTH for exposing Amateur Radio to the general public. When I arrived, the ops were in the middle of a superb 6 meter opening. It’s always a pleasure to visit with Dan, W1DAN, Arline, W1LIO and the other folks. Arline was not going to let me escape without sampling the excellent chicken and beef shish kebab and salad.

While there, I checked into the Eastern Mass.Two Meter Net to receive a number of Field Day radiograms destined for the Section Manager. Jack, N1TPU, of the Needham ARC, acted as NCS. 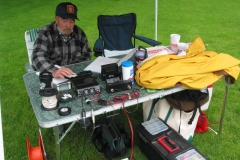 My vote for the prettiest Field Day site goes to MVARG. Their “3A” category operation was located on a high hill on the Tufts University campus. Many would-be students and their families strolled by the site during the course of the weekend. And the beauty was accompanied by–a strange silence. I learned that MVARG’s stations were operating on battery power! Additionally, a solar panel was standing by in the event the cloud cover broke and allowed us to spot the sun.

An ATV demonstration was scheduled for later Sunday morning.

MVARG wins my vote in one additional category: the most exotic food served up during Field Day weekend. Priscilla, N1VQY, told me that the group dined on caviar! 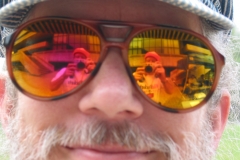 Leave it to the engineers at MIT to come up with a fully functional site located directly in front of a busy building—the student center! The “2A” W1MX operation was going strong when I stopped by mid-morning on Sunday. Steve, W1GSL and crew had a nice informational table and guest sign-in sheet, in addition. A small generator was tastefully concealed behind a nearby flower pot! 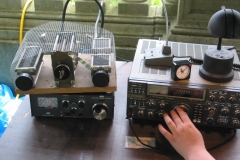 Boston ARC’s W1BOS operation at Larz Anderson Park was in a “new” location this year. Recent park renovations by the town forced the club to set up in a slightly different configuration nearby. As a result, the group thinks they have come up with a more optimized layout for their “6A” effort.

The BARC crew was joined this year by members of the Northeastern University ARC.

WX1G “held down the fort” with his iron-man operating efforts. I’m told that David single-handedly made 500 CW QSOs!

I was impressed with the number of flexible VHF and UHF operating positions, and the organized food and drink facilities. 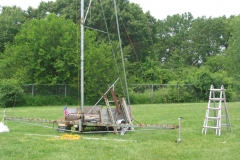 I made one last stop at the Norwood ARC, in a field behind the local high school. The K1JMR crew featured a visitor’s tent and a GOTA station. I was especially impressed with their nifty military “push up” tower. I was given a tour of the facilities, and invited to operate.

I joined the group for hamburgers and hot dogs. As N1UEC commented, “You know you’re dealing with a serious grill when it has its own license plates.” 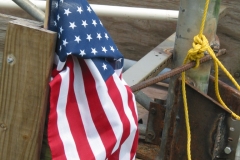 I’d like to leave you with a few final thoughts. As a group, hams can be very innovative and flexible. When equipment breaks or last-minute plans change, we take it in stride. We are adaptable.

We like to stick to plans and strategies that have worked in the past, but we’re not afraid to try new methods, either.

We’re quick to set aside the “contest” aspect of Field Day to give a helping hand to hold a rope, to hammer in a ground rod, or spend a few minutes explaining ham radio to a visitor.

We come to Field Day to be with one another. We’re sociable. We want to achieve and to accomplish.

We’re patriotic. We realize that when we invest our time and energies in this weekend event, we are making our communities and our nation a safer place to live. But above all, we genuinely respect each other, and we enjoy one another’s company. We share a mutual interest in a hobby and service known as Amateur Radio. And as a result of our efforts, the world is a little better off than it was before.