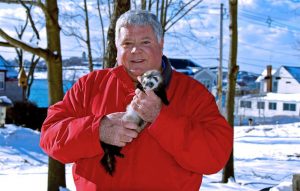 I have been around radio all my life especially during my 11.5 year military career. From the time my dad build a simple diode AM rcvr I was hooked on radio and communications technology in general.

Having taken a break from radio for many years I decided to get back in to it by becoming a ham in July 2014 having passed the Technician exam. I then passed the General exam in February 2015 and the Extra on October 10, 2015.

My station consists of a Yaesu FT-991 operating in HF, VHF, and UHF. I use a BuddiPole or an inverted Vee for HF and a Diamond X50a at about 25 feet in height. I also have a Yaesu 857D and a VX-6R to operate with.

I really enjoy working with the National Traffic System (NTS) and the opportunities it provides to operate in different modes and conditions. My station is an ARRL Official Relay Station as well as an ARRL Digital Relay Station. I am the Net Manager and an NCS on the Eastern MA 2 Meter Traffic net. I also have NCS duties on the Central MA 2 Meter Traffic Nets as well as the 75 meter MA-RI Phone Net. I was named as the Assistant Section Traffic Manager on September 1, 2015. All of that and three dollars will get me a cup of coffee…

Recently I have begun operating on the MARI CW NTS Net. There is a lot more than learning code so it is quite a challenge for me right now!

I am an active member of the South Shore Hospital Radio club W1SSH. I also have memberships with BARC – the Boston Amateur Radio Club. 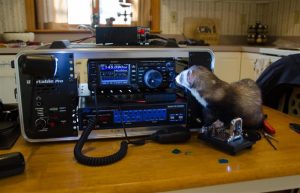 As you can see from the pictures I have ferrets for pets.

For 22 years these amazing animals have kept me on my toes with    their intelligence and never fail to make me laugh!