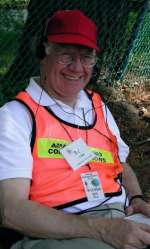 Follows is N1DHW’s report on last month’s Salvation Army communications exercise in Sharon, MA in which an ARES group from the Boston Amateur Radio Club participated. (N1DHW is Massachusetts SATERN Coordinator.) Additionally, the EMA ARRL SEC and several DECs were present at the exercise as observers.

This report was picked up and disseminated on SATERN’s nationwide mailing list by Maj. Mac Phersen, WW9E, SATERN National Director.

“Be Prepared”. Every ham involved with Scouting as a youngster remembers that motto.

Well the Massachusetts Division of the Salvation Army, along with its supporting SATERN Group, and members of the Boston Amateur Radio Club’s Emergency Response Team (BERT) are another great example of those believing in Being Prepared.

To begin their story, be aware that numerous warnings have and continue to be posted relating to a fear of terrorist activities occurring this summer in Boston, during the Democratic National Convention scheduled for late July. While the Mass. Div. of the Army has participated in surrounding communities Terrorist and HazMat Drills, it was the Emergency Disaster Services and SATERN members who benefited from these earlier training exercises.

In order to expose more of the Mass. SA Officers, staff, and volunteers to some hands on disaster training, the Mass. Division leadership formed an internal, statewide Disaster Service Organization. (DSO) The Officers and staff they assigned to this DSO were then ordered to complete courses in the Incident Command System, and a volunteer specialist was then asked to design a drill that would first test the groups response to the emergency scene as a Disaster Relief Agency, and then to examine their ability to coordinate the SA relief operations throughout the drill.Sounds like any other staged drill doesn’t it. Well, the Division Commander went a step further, he said the drill had to be designed to utilize ONLY radio communications. No phones, cell phones, fax machines, email, or any other means of commercial communications. (. . . he and many others in the Division are veterans of WTC service.).

This brings us to the real meat of the story. The preliminary drill scenario was designed and then dropped in the lap of their Emergency Service Coordinator, Bill Foley, kb1glf, who in turn called on me as the Mass. SATERN Coordinator, for support. We were directed to come up with a communications plan that not only permitted legal radio communications for the non-ham officers and volunteers to communicate, but to also insure that if they couldn’t do it effectively, we had a backup communications plan in place. Now the simple solution for backup would be to enlist aid and support from the ARES group, which in Eastern Mass. is a model for many to follow.

Instead, since this was a closed SA agency drill, we chose to really test the Army system. The Mass. SA Disaster Rehab/Canteens had all been radio equipped utilizing a business band repeater, we had a dozen Vertex 160 hand-helds, both a Divisional EOC and a backup EOC at Camp Wonderland in Sharon, Ma. (. . this is a town located outside of the Boston area which was to be the drill site location.) both of these EOC’s have all band radio equipment installed, and we also had a recently completed ( but yet untested) communications vehicle.. (a local University had donated a modern ambulance to SATERN that we had just completed the installation of VHF/ UHF/ 6mtr/CB/GMRS/FRS/Busn Band and HF radios and antennas, a Honda generator, and finally an inverter for the onboard laptops). In addition, the same University donated a dozen Motorola Saber handhelds with spare batteries and chargers, formally used by their Police Dept., and we had these radios cached onboard the new Comm. Unit. The picture began to form, but we were still missing something.

Well we had plenty of equipment, so now what. After some discussions with the drill designer, Al MacLeod, we knew that one business repeater frequency would never handle the traffic expected, nor could we expect to see the necessary radio operating skill and discipline from those SA non-hams involved, in such a short training window. We also assumed that in any major Boston incident it would be very likely that our SA Business repeater could go down. We really needed some additional talk-power, and earlier HazMat experiences made FRS out of the question in the city.

A search of the FCC database, and a verification call to ww9e, Maj. Pat Mc Phersen, the SATERN National Coordinator, assured us that the Salvation Army has a nation-wide transient business frequency pair. We monitored these frequencies for 3 weeks and heard a one time 30 second casual non-identified transmission. Our decision then was to use 3 business band simplex frequencies for the SA non-hams, selected vhf simplex frequencies for the hams involved, and one local ham repeater for any real life emergency traffic. The SA command business frequency would be completely open and free to the SA IC staffs usage, while the secondary tactical and traffic frequencies along with the ham shadow operations, would utilize a Net Control Operator.(ham) We then added the SA transient frequencies to all the SA hand radios, (25) and received permission from the ham repeater trustee to use the local repeater. Memos were sent to the two coordinated local area FCC licensee’s of the transient frequencies, explaining our intention to use them on simplex on our drill date. We had a Communications Plan. ( . all of the SA frequencies and the ham simplex frequencies are now a permanent part of the Divisions Response Radio Plan)

THE DRILL This first drill’s design did not directly involve local first response agencies, although they really did want to fully participate with all their resources. We promised a combined drill at a later date. In fact, since the drill was designed to test only SA internal relief operations, volunteers were recruited to simulate these groups. However, we did have a number of official observers: Sharon Fire Chief, Hingham Fire Dep.Chief, and Boston Fire Dep.Chief, Sharon Police, State and local Emg.Mgr’s, Mass.Fire Chaplin’s, MIT Univ.Police Radio Officer, the E. Ma. ARES SEC, Boston DEC, and local EC’s, all who actively participated by monitoring our ICS and radio operations.

The scenario was a Boston rehab canteen arriving to support the town of Sharon Fire Dept. during a large warehouse fire. As the fire escalated, the first arriving canteen team leader radioed for an additional canteen to respond. However, before its arrival, explosions at the warehouse spread the fire to surrounding woodlands and quickly threatened a nearby housing development. As the first houses were enveloped, resulting in evacuees and injuries; the first responding canteens team leader, acting as the SA IC immediately made a call to Div.Headquarters requesting deployment of the DSO. (..this callout not only calls for the SA DSO personnel to respond, but also calls out all available canteens and support vehicles, Ministry, pre-registered disaster volunteers, the communications command vehicle, as well as SATERN/BERT members necessary to man the EOC and Comm Van. The SATERN leader also alerts the EMa SEC)

Up to this point everything went as planned. Our first problem occurred at the Stage Area as the first DSO and ham shadows arrived. I was busy establishing the EOC operation with the Satern members who responded first from the nearby R.I. area, Bill was busy positioning canteens around the fire zone, and we neglected to assign a “take charge” ham to dispense and instruct those inexperienced first responding DSO personnel, as well as issuing them radios and ham shadows. As I thought about it later, all of our ARES drills, ham supported PS events, etc; have been well rehearsed over the years, usually planned to the last detail. We always have well experienced NC operators, the frequency list has usually been distributed earlier for convenience of pre-programming our radios, experienced hams are placed in critical positions, site locations documented and usually mapped and distributed. Most of this will have to be done on the fly at a real life event, because you don’t know what hams will respond, or when. We got it straightened out, but lost valuable time. [Something for all to keep in mind, graciously accept assistance from one of the first knowledgeable responding hams, or offer to assist if your that knowledgeable early arrival .] Another mistake pointed out was in having two NC operators, one in the EOC, and another to handle traffic/ messages in the field Comm. Unit. Having the two operators was fine, but having them in different locations proved un-manageable. They should both have been located at the EOC working closely with each other, and the SA Incident Commander and the Division staff. (. .other problems reported by the observers, or voiced by the hams in the After Action Meeting are listed at the end.)

As far as the DSO personnel went, they did an outstanding job for their first time working together, and the first time using the Incident Command System,. While some liberties were taken from a strict ICS structure, the key observances from the knowledgeable ICS observers present was; “the SA Operations Chief attempted to do everything himself”, next was the lack of visual identification of key IC leaders. ( .some discussion of this occurred prior to the drill, but since we are a support agency, we are not the Incident Commander, Op’s Chief, etc, so it was agreed that we would not purchase these readily available vests, but instead later find an outlet to design an easily identifiable Salvation Army ID responders vest.)

I did catch a few on their cell phones, and they were immediately beaten with my trusty “wouffe hong”.

The drill was finally completed in late afternoon after having tested all of the designed elements/activities. The conclusion was: “The exercise was an exceptional success.” We, and the observers are confident that this Massachusetts Division is more ready today to respond as a team to any local major event, and we know that our performance will be note worthy. Yes, we still have a lot to work on, based on lessons derived from this self-test, but we’re confident that we will get it done. In fact, we were working on it the next day.

As for the 25 supporting hams, I had email on my computer when I finally got home that day asking; ” What is the date for the next drill?” What a group! None complained about the 90 plus degree heat, the long day, or the miles of walking they endured as shadows over that 110 acre site. They made me proud to be a ham and have them as friends and fellow volunteers. In addition to the hams volunteering themselves, some also had wives and family accompanying them, and they were trained in Disaster Relief skills, while others were actors/ actresses for the day as triage victims, evacuees, and grieving relatives.

A special thanks must go out to the Pennsylvania SA Disaster Services Group for bringing up that magnificent Eastern Territory’s 40 foot Disaster Field Kitchen trailer and its supporting crew. Oh, did I mention that we had over 250 participants at the drill, or that they were all fed a delicious dinner from that kitchen at the end of the day. Also, groups of volunteers were trained on-site in the operation of that kitchen trailer, and it was those volunteers who helped prepare the evening meal. (lunch was provided to all while in the field and served from all the canteens as a drill segment)

There is no greater reward than that of helping a person in need. We learn this as children in Scouting, church youth groups, later as hams, and are reminded again so vividly when we assist at a real life disaster as adults. Please don’t waste your precious time, talent and ability. Join us by actively participating in SATERN and the Emergency Disaster Services of the Salvation Army nearest your home. Help us to help others.