In an actual emergency scenario, the City of Taunton would see 110 school buses and about 10,000 extra people evacuated into the city. The American Red Cross would plan to set up shelters if people were still housed in the host schools after 8 p.m. And some of the mass care shelters would be set up in neighboring cities and towns.

Each city and town has a core group of Amateur Radio RACES operators on call. The plan is to staff each host school with an amateur radio operator equipped with a 2-meter/440 MHz transceiver “go-kit” providing backup communication between the host school and the Emergency Operations Center.

“The likelihood of anything happening at the Pilgrim Nuclear Power Plant is very unlikely,” stresses Herb Lemon, KC1ZW, who serves as the Emergency Management Agency Director for the Town of Bridgewater. “There are all kinds of safeguards in place.”

Even so, the drills pay off in other ways, according to Whitman ARC President Bruce Hayden, NI1X. “The training and equipment in place enables the cities and towns to be ready to respond to any emergency, not necessarily related to the nuclear plant.” Hayden sites last year’s Dam crisis in Taunton as a case in point. 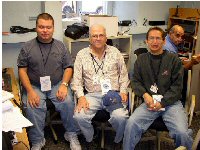