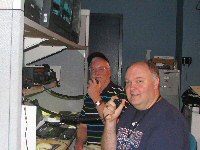 All three branches of the Military Affiliate Radio System (MARS) were involved in a four-hour, time-compressed hurricane drill affecting the eastern United States.

Army MARS was the lead branch with assistance from Air Force and Navy-Marine Corps MARS. The large drill focused on the recovery phase of a Category Four hurricane. The drill encompassed fifteen states, with most of the infrastructure damage, evacuations and flooding situated in Connecticut, New York, and New Jersey.

Neilsen and Kinahan also used Echolink to communicate with Air Force MARS member Phil McNamara, N1XTB, of Middleboro, MA. Winlink messages were also exchanged with N1XTB, who monitored the progress of the exercise on the MARS HF command and control frequency and passed along notable drill occurrences; for example, the C-130 damage assessment overflight.