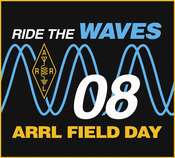 The League having published scores to the Members’ web, the EMA Field Day 2008 Results are now also posted to Club and Site listings and the History section of the 9th Annual ARRL EMA Section Field Day Directory. http://ema.arrl.org/fd/History.php

There were 29 clubs reporting A, F, and club E/D stations for EMA, the most since 2001 (31) and 1999 (30). While this double counts a few joint stations where multiple clubs were doubling up, MITRE and BARS ran two joint sites, and MIT had both an off campus Class A and their UHF Contest Station (a separate club technically) in Class E.

So congratulations to NSRA. http://www.arrl.org/contests/soapbox/index.html?con_id=155&call=NS1RA&bbycall=1

Cape Ann and Genesis also set decade club bests with their return to their old sites in 2008.

Sadly, not a lot of EMA clubs posted pictures or commentary on League Soapbox; but in addition to NSRA’s above, I saw a nice soapbox from an EMA Mobile http://www.arrl.org/contests/soapbox/index.html?con_id=155&call=K1UR&bbycall=1.

The Graphical analysis charts now include *all* Divisions, in addition to all reports, Eastern Mass Section, *and* now a zoom on just class F stations, 2005-2008. http://ema.arrl.org/fd/history/analysis.html (The box areas are in proportion to the total points of the whole chart for that year, and are NOT comparable from year to year or even page to page within year.)

* NNJ may be the only section with more total points in Class F than Class A.
* There are no DX stations in the published scores for 2008.
* 2A remains the Category responsible for the most total points overall and per division, with few exceptions (3A – Dakota 2008, Atlantic,Great Lakes, Hudson 2007+2008).

Eastern Mass doesn’t show too well in Class F, possibly because less than half (2 of 5 known) of our Emergency Management teams participating in Class F submitted reports to League Contest Office, compared with (5) the prior two years. Several other Emergency Management-equipped clubs appear in the Class A listings, which is a goodness.