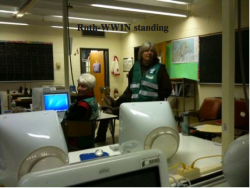 According to CAARA president Stan Stone, W4HIX, “This was the first time that EOC has been activated, so there was a lot to do in getting set up. The CERT members went to work on a work/sleep schedule, scrounged furniture and supplies from around the Fuller School, made coffee, and generally got the facility operational.”

The operation had to overcome several obstacles along the way. “The EOC suffered a power failure and the generator worked for a couple of hours until it failed. The Internet service was routed through the school system, so it had many restrictions, and ultimately failed because the backup generator at Gloucester High School failed.”

“I will say [the operation center] was quite successful for the first time,” remarked Gloucester’s Emergency Management Director Miles Schlichte.

“It was quite an experience, and a great shakedown exercise,” said Stan Stone. Stone has had subsequent meetings with Gloucester IT managers to make the Internet connection more robust, and he also plans to meet with city professionals to discuss radio improvements for the Gloucester Fire Department, and data communications for the Department of Public Works.

Said Stone: “The key lesson was that you have to test every system and learn their failure modes.”