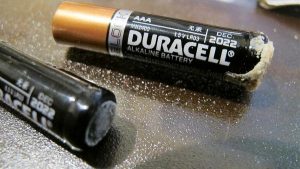 I forgot to remove batteries from a measuring instrument. AA Panasonic batteries cracked and some kind of fluid came out. On visual the damage does not appear to be fatal. However there is considerable white residue left. Any hints on what will remove the residue?

Flush with de-ionized water and then dry with alcohol.

I avoid vinegar (acetic acid) as it can do more damage than good. Sure it neutralizes the alkali, but diluting it with water is just as effective at reducing the alkalinity and doesn’t leave an acid residue.   If there is a lot of leaked battery electrolyte  you can wipe it up with a cotton swab and then neutralize with vinegar before putting it in the trash, but don’t put the vinegar on your electronics.

De-ionized water readily dissolves the contamination and washes it away, the process can be sped up by scrubbing with a cotton swab. You can get de-ionized water at the grocery store in gallon jugs.

I prefer methanol for use on electronics, but isopropyl (rubbing alcohol) is commonly available and will work just fine. Look for a high percentage for best results. Medical isopropyl is often only 70-90%. 99% or greater is what you want. A gallon can of it from the hardware store is generally the cheapest way to get it. Water content in the alcohol slows down the evaporation time and can get left behind in little crevices like under chips or in through vias.

Flushing with pure alcohol washes away residual water and then quickly evaporates leaving nothing behind.

You may need to use a dental pick or some emery cloth to remove any corrosion that has increased the contact resistance of the battery terminals.