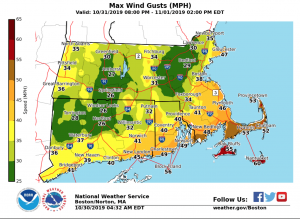 “The  biggest, a coastal storm event on October 16-17, 2019, resulted in widespread pockets of trees and wires down across the section. Hurricane force wind gusts were reported by Amateur Radio SKYWARN spotters along portions of the south coastal Massachusetts, Cape Cod and the Islands and even the North Shore of Massachusetts,” Rob writes.

Hundreds of damage photos were received by Amateur Radio operators and SKYWARN spotters. At the height of the storm, approximately 250,000 were without power in Massachusetts.