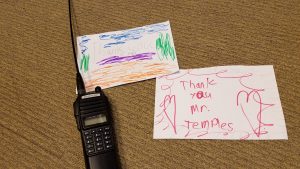 Phil Temples, K9HI, has combined his passion for ham radio and involvement in the Boston College “Read Aloud” program to bring a message about ham radio to Mrs. Cafarelli’s third grade class at the St. Columbkille Partnership School in Brighton.

A BC Read Aloud volunteer for the past sixteen years, Phil shared his unpublished children’s story manuscript entitled “Ashanti’s Ham Radio Saves the Day” with the class last month. It was well-received, despite the fact the manuscript lacked illustrations.  (Several of the kids volunteered to draw pictures for the book.)

This month, K9HI brought along a Baofeng dual-band handheld for show-and-tell. He was able to establish a QSO on the Waltham repeater with John, K1BSO, who was mobile in Woburn. John told the class about himself, and stood by while Phil passed the radio around. All sixteen children had an opportunity to say hello over ham radio. At the end, they shouted out an enthusiastic “Goodbye!” that could be heard throughout the floor.