Last week, I sent this message out to our D-STAR users…. I am forwarding it since it contains some information that may be helpful.

The latest information is that new antennas are up and the new hardline is installed. There is a tentative switch over to the new water tower scheduled for next week. As soon as I know what day this is to occur, I will send a message out.

There will be some downtime where all three repeaters will be offline to conduct maintenance. All three repeaters have been on the air without any down time since December of 2018. That is over 11,500 hours EACH. We expect that the switch will be seamless, but please be aware that during the changeover, the repeaters may be up one minute and then down the next. If we encounter any issue with the changeover, we will revert to the previous configuration.

Change is coming… so let me expand on what is existing now and what is happening soon. 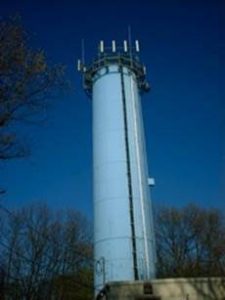 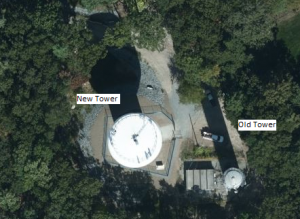 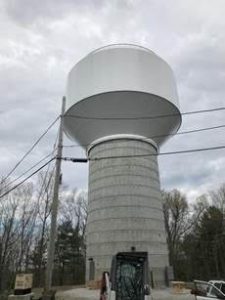 A new, bigger water tower was built adjacent to the old tower. The old water tower is scheduled to be torn down in the future.

Three NEW commercial grade replacement antennas were ordered and are waiting for the new coax lines to run, then the new antenna to be placed (all 3 of them) on top of the new water tower tank on a pedestal that has already been built. When the antennas and hardline runs have been tested and we have been advised they are ours, I will go to the site and start making the switch to the new antennas.

The latest word I have was just this week… the hardline/coax installation was to be started this week. I was asked about the new antennas, so hopefully they are being transported to the site/installer.

The new water tower is considerably larger than the old water tower. It is about the same height as the old tower, exact dimensions are not yet known. The new tower is about 80-100 feet away from the old tower. That does mean that the hardline/coax runs to the new antennas are longer. The antennas are the same antenna models we have had previously. Because there is a little shift to the north in physical location, we expect pretty much the same coverage on the 955 analog and the 442.450 D-STAR repeaters. We do expect a significant change in coverage of the VHF D-STAR 145.330 repeater.

This is all the information I have at the moment. I will advise of any significant deviation from what was outlined above when known.

Thanks all for your support to our WB1GOF repeaters.

One Comment on “PART of Westford Repeater Antenna Improvements”