YCCC is inviting you to a scheduled Zoom meeting.

Feature talk: K5ZD on Tips for Being a Better Single Operator

The New England Sci-Tech Amateur Radio Society will meet on-line and in-person on October 12, 2021 at 7 PM and feature Joe Fitzgerald, KM1P,  who will present on “Contesting Preparation for STARS.” Joe will briefly discuss those opportunities and provide guidance and resources.
Joe is a STARS member, is an avid contester, was #1 USA Single Operator in the 2021 ARRL DX contest, and holds an Amateur Extra license.

Please note that this month’s General Meeting of the Boston Amateur Radio Club will take place at the usual date and time on Thursday, October 21, at 7:30 pm on the Zoom teleconferencing platform. Our speaker will be Skip Denault, KB1CNB, from the Bristol [County] Repeater Association, who will give a talk on fox hunting, equipment and set up.

Further details will be forthcoming in this month’s issue of The SPARC.

Just a reminder that the October Algonquin ARC meeting is next Thursday, 10/14, at 7:30 p.m.  We will be meeting both in the school library and on Zoom.  Zoom link will follow closer to the meeting.

Our guest speaker for the October meeting will be Tom Frenaye, K1KI, speaking about the New England QSO Party.

YCCC Member Andrew – KC2G will be giving a presentation on the propagation website he developed:

Additionally, you may find the presentation by Jose – CT1BOH from the 2021 Spring Contest University interesting:

Check out Jose’s presentation that starts at the 5hr:39min mark and see how he used the data presented on Andrew’s site to improve his analysis/prediction of potential DX paths.

“This Thursday, [October 7, 2021 at 7 PM in 503 Hayden]  our resident ham guru Marty Sullaway, NN1C, will be giving an introduction to ham radio! We’ll talk about what ham radio even is, what cool things you can do, and how you can get involved.”

The New England Sci-Tech Amateur Radio Society and the Wellesley Amateur Radio Society will hold a joint online and in-person meeting on Tuesday, September 28, 2021 at 7 PM at New England Sci-Tech, 16 Tech Circle, Natick MA 01760, Telephone: 508-319-9592.
The STARS radio room will be open from 5:00-7:00 PM with informal radio activities.
The joint meeting with the Wellesley ARS will begin at 7:00 PM.  Jeremy KB1REQ will demonstrate cabling kits.
Refreshments will be served.

Leandra MacLennon, AF1R, will present: “On The Road With AF1R” at the October 7, 2021 meeting of the Framingham Amateur Radio Association.

Members will receive a zoom invitation.  Non-members may request an invitation by sending an email to John at president@w1fy.org. 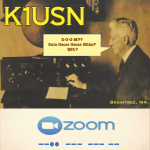 This “Candidates Night” will be an opportunity to learn more about each candidate and to ask them questions about their view for the future of Amateur Radio in New England.

We want to see a good turnout for this Zoom session and hope that you will have some questions for the candidates.

Questions should be addressed to all three candidates. Please forward any questions to Pi – K1RV ( k1rv@arrl.net ) as well as to Thaire – W2APF ( thaire.w2apf@gmail.com ), who will be acting as moderation for the evening. Preference will be given to written questions submitted in advance and we also hope to take live questions via the Zoom chat window during the session as time permits.

[If you would like to join our rapidly growing list of K1USN Zoom attendees then send me an e-mail ( k1rv@arrl.net ) to be added to the master Zoom list which is separate from the K1USN member list.]

Brendan Baldonado, NW1S, writes on the Boston Amateur Radio Club mailing list:
Hello All,
No doubt your email has been full of the tales of our last Parks On The Air (POTA) activation.  Well, let’s do it again!
I am planning to go to Magazine Beach in Cambridge to activate. I visited around the 4th of July and thought it was a great little park. It happens to be part of the Charles River Reservation, Park K-8405.
I am planning on going Saturday, September 25th at 11:00 AM. Bring your own food, snacks and water, I will bring four chairs and a small metal table to operate on. ALL are welcome.
They have parking,  ” Magazine Beach Car Top Launch, ” https://goo.gl/maps/pvvqWu2KaQkkZvvg7. The parking Limit is 4 hours which should be more than enough time.
Also the location is just off the #47 Bus. or a short walk across the BU Bridge from the Green Line, BU West Stop.
There are Porta Potties nearby and a Trader Joe’s for food and beverage.

We will use the Boston repeater to coordinate arrival and meet up.

It may rain on Saturday, if that happens I won’t be able to go Sunday due to a previous engagement but anyone else I will encourage to go.

On Tuesday, September 21, 2021 at 7:00 PM, Clint Bradford, K6LCS, will present “How to Work Amateur Satellites with Your HT” (meeting is both in-person and online) at the New England Sci-Tech ARS (STARS) meeting.

You do not need 100W of transmit power nor expensive antenna arrays to work the FM amateur satellites! Many hams already have the necessary equipment to “work the birds.” This presentation will walk you through ALL the steps needed to successfully work several ham satellites.  This presentation has been well-received by more than 100 clubs and conventions to which Clint has given it. Between the material presented, the handouts, the always-lively Q&A during and afterward, and the www.work-sat.com support Web site, STARS will be providing attendees complete information on this aspect of the amateur radio hobby.

Clint K6LCS has been a ham since 1994 and found his niche in the hobby working amateur satellites with minimal equipment and telling all about it! He has served as a liaison between NASA, the ARISS team, and schools coordinating amateur radio contacts between the International Space Station and students (and orchestrated a wildly successful ARISS contact). Audiences have never found his presentation slides “wordy” or dull and trivia questions are included throughout the session.  For reference materials, Clint has created a support Web site at www.work-sat.com for all to use. The Web site has become a one-stop source for all the citations, equipment recommendations and software suggestions made in the presentation.  Professionally, Clint was sales manager for ADI / Premier Communications / Pryme, worked for a Motorola commercial two-way dealer for a couple of years, and for Ham Radio Outlet for a couple more. He resides in Jurupa Valley, California, with his wife, Karen, and their rescued lab, Freja.

George Allison, K1IG, writes on the PART of Westford list:

The September [PART of Westford] meeting will be held on Tuesday, September 21, 2021, beginning at 7:30 PM via WebEx video conference.  A meeting link is below; just click on it to join in.  You can join the conference any time after 7:00 PM to check out your gear or just rag chew until the meeting starts. We will NOT be meeting in person at the Senior Center until further notice.

The meeting topic will be “Programs Helping Hams and Young People to Develop New Skills and Get on The Air,” presented by Fred Kemmerer, AB1OC. Fred is president of the Nashua Area Radio Society (and a PART member!), and he’s been mentoring young hams and prospective hams for many years. He’s got some good ideas about getting youngsters interested in the hobby and ways to get new hams better acquainted with all the things they can do on the air.  <…>

See you at the meeting!

Alan, KD1D,  will make a presentation on locating hidden transmitters for hams [at the Billerica Amateur Radio Society meeting on October 6, 2021].  He’ll discuss “fox” transmitters and radiolocation methods for fun, radiosport and practical applications.  RF fox hunting is fun, provides us with physical and mental exercise and teaches us how to locate sources of interference like repeater trolls, stuck transmitters and unlicensed operation on our ham bands.

There are many Fox Hunting opportunities in our area.  This will get you started in this most fascinating aspect of amateur radio. Please join us for an evening of Amateur Radio excitement!

From the Minuteman Repeater Association newsletter:

Dave will discuss his Shortened 80-meter End Fed Half Wave Antenna. He will start with an overview of End Fed Antennas then, move onto the End Fed Half Wave. Dave will talk about how to feed an End Fed Antenna, counterpoise, and grounding. He also will discuss the design of his two End Fed Half wave antennas, the differences and performance, as well as design of the transformers and the common mode choke. He will also delve into the need for a counter- poise and common mode choke.

David’s interest in radio began when he was a kid and hung around the shack of his uncle Myron Hornbaker, W0GFU (SK), Fowler, Kansas. He got his First-Class Radiotelephone License in 1975 (now, General Radio- telephone Operator License). He was employed by a local telephone company as an installer of IMTS telephones in automobiles. Later, he went to work for Wichita, Kansas television station KAKE-TV as a master control operator. 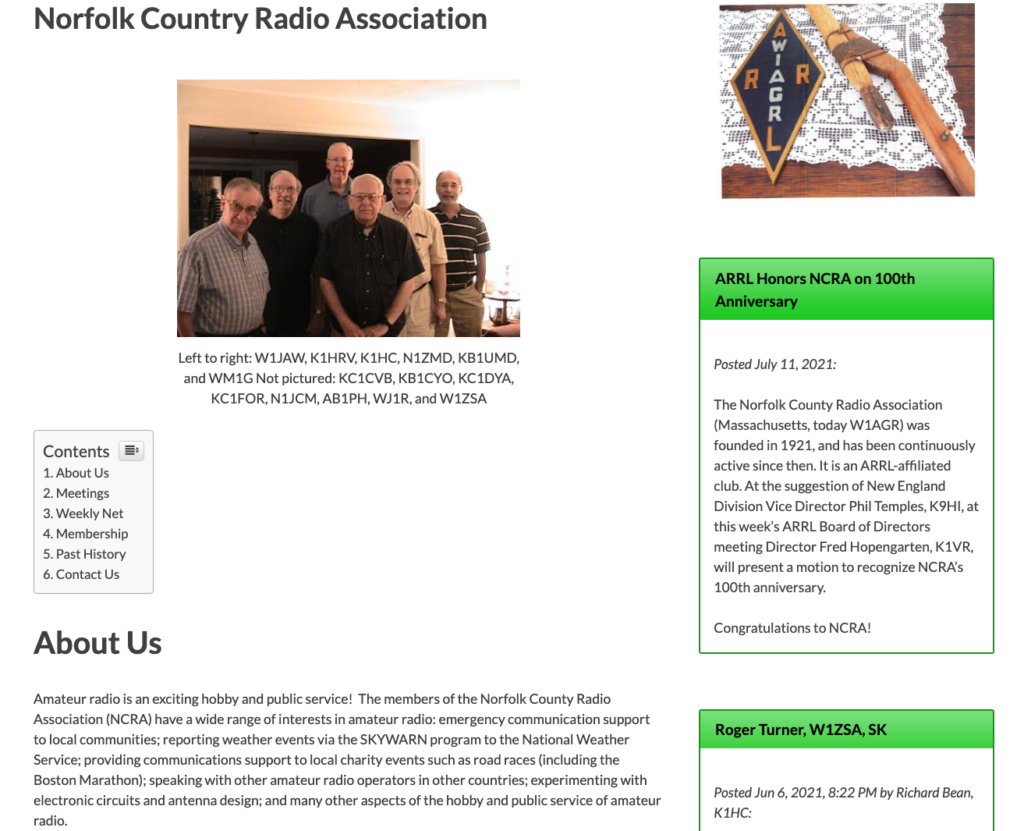 On Tuesday, August 31, 2021 at 7:00 PM, Fred Kemmerer, AB1OC, will present “Programs Helping Hams and Young People to Develop New Skills and Get on The Air” at the New England Sci-Tech ARS (STARS) meeting.

Fred Kemmerer, AB1OC, will be the featured speaker at the Framingham Amateur Radio Association meeting on September 2, 2021 at 7 PM. He will present on “Programs Helping Hams and Young People to Develop New Skills and Get on The Air.”
For Zoom login information, please send an email to president@fara.org.

This is a discussion on HF Digital Modes concentrating on FT8. The history and evolution of WSJT-X modes and its derivatives, like JS8-Call, JT-65, FT-4 and WSPR. We will also look at a few standalone kits for digital modes that you can build yourself, as well as an overview of FT8 software and associated software for digital modes.

Neil Goldstein, W2NDG, has been tinkering with radios since the early seventies when he used to hang out in his uncle’s ham shack in CT (W1PVC SK). These days he can be found in the Hudson Valley and Catskill Mountains with a QRP radio, or sitting at his workbench amidst a cloud of solder smoke. After first getting licensed in 2011 as KD2APZ, he started looking for ways to merge his two hobbies: computers and radio. Now, a holder of an Extra Class license, he experiments with SDR, rig control, digital modes, and has a well-used soldering iron. Neil maintains radiokitguide.com, the complete list of radio kit sources on the Internet. 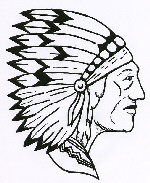 Fred Kemmerer, AB1OC, will be the featured speaker at the QRA Zoom meeting at 7 PM on August 19, 2021. He will present on “Programs Helping Hams and Young People to Develop New Skills and Get on The Air.”
For Zoom  login information, please send an email to Don, W1DM (at) arrl.net.

This presentation will cover procedures, resources and clubs involved with public service events. Items discussed will include typical tasks, recommended equipment to use and communications protocols. Information about training as well as the groups and agencies that need radio support are also presented. Bruce has been doing events since 1989. He has been an operator, leader at large activities and a ham planner and organizer for various Public Service events. Bruce has maintained repeater systems, done many Field Days, participated in VHF contests, and built APRS tracker boxes. He has held a number of engineering positions, such as component engineer and test engineer for assembled boards and IC wafer trim and test.