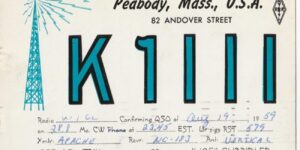 The Daily Item reports on a collect of QSL cards going back to the late 1950’s that was donated to the Peabody Historical Society in Massachusetts.

Ham radio operation might seem like a blast from the past but, according to the Peabody Historical Society, the pastime is actually still quite popular.

In fact, according to the Historical Society’s Associate Curator, Nora Bigelow, the COVID-19 pandemic has provided people with a perfect opportunity to kindle — or rekindle — their fascinations with it.

To get started with this hobby, one simply has to be a non-professional radio operator. Still, these radio enthusiasts still need to pass an FCC test to become licensed. After that, they are assigned a call sign — in other words, a group of identifying letters and numbers that serves as an address for the radio station’s transmission signal.

Operators also need to have a radio, transmitter and receiver in order to get started. If you were to balk at the price tag of such an endeavor, never fear — some beginners even start by building their own equipment.

The Peabody Historical Society recently received a donation from the estate of longtime resident Michael Schulze, which included a collection of call-sign cards from the late 1950s and early 1960s.

Of the peculiar properties of the ham radio, Bigelow noted that it’s interesting that people from bygone eras were able to communicate with both locals and those from farther afield depending on the range of their radios.

Bigelow said that while people usually conjure up images of the American Revolution when they imagine our country’s history, the call-sign cards offer a more intimate look into Peabody’s own past. She added that by studying ham radio use, we can begin to understand more of how people choose to communicate.