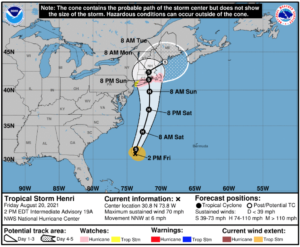 08/20/2021 – The Hurricane Watch Net (HWN) is mustering as Hurricane Grace, a Category 1 storm with maximum sustained winds of 85 MPH, is expected to make landfall between Túxpam and Veracruz, Mexico. The storm swept over the Yucatan Peninsula yesterday.

“We plan to activate this afternoon at 2100 UTC on 14.325 MHz and continue on this frequency until we lose propagation,” HWN Manager Bobby Graves, KB5HAV, said. “We will start up on 7.268 MHz at 2300 UTC and continue for as long as we have propagation.”

Graves said that once attention shifts away from Grace it will zero in on Tropical Storm Henri, which is expected to make landfall in New England on Sunday. As of Friday at 1800 UTC, Henri was “almost a hurricane,” according to the NHC.

Eastern Massachusetts Section Emergency Coordinator (SEC) Rob Macedo, KD1CY, has announced that Eastern Massachusetts ARES will be placed on stand-by later today (Friday). Macedo noted in mid-afternoon that WX4NHC at the National Hurricane Center already was on the air to gather weather data via amateur radio.

The Boston/Norton National Weather Service office will be the primary agency during Henri for any SKYWARN-related activity. “VoIP Hurricane Net and New England SKYWARN regional operations will be combined to form one large network as done in past major tropical systems such as Irene and Sandy,” Macedo said. [Echolink *WX_TALK* Echolink conference node: 7203/IRLP 9219 and *NEW-ENG3* Echolink conference.] “Information from ARES-SKYWARN will be shared with other agencies including state and federal emergency management, Red Cross, The Salvation Army, and media outlets,” Macedo added. “We will coordinate with the Massachusetts Emergency Management Agency (MEMA).”

At 1800 UTC, Henri was 320 miles south-southeast of Cape Hatteras, North Carolina, and 720 miles south of Montauk Point, New York. Henri is heading north-northwest at 6 MPH, bearing winds of 70 MPH. Storm surge and hurricane watches are in effect for portions of the northeastern US. A Hurricane Watch is in effect for the south shore of Long Island, from Fire Island Inlet to Montauk, the north shore of Long Island, from Port Jefferson Harbor to Montauk, New Haven, Connecticut, to Sagamore Beach, Massachusetts, and Nantucket, Martha’s Vineyard, and Block Island.

“A turn toward the north is expected by tonight, and Henri is forecast to accelerate in that direction through early Sunday,” the NHC said. On the forecast track, Henri is expected to make landfall in southern New England by late Sunday.”

Additional strengthening is forecast into the weekend, and the NHC expects Henri to be a hurricane by Saturday and be at or near hurricane strength when it makes landfall in southern New England.