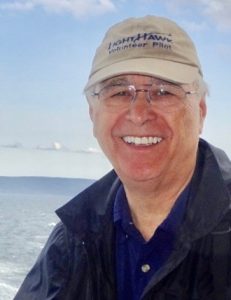 Bob Glorioso, W1IS, an ARRL Life member, was first licensed in 1955 as WN1EBW and later as W1EBW. After college, BSEE, graduate school, MS in EE, PhD in Computer Science, and military service he upgraded to Extra and got his current call, W1IS. As many other Hams, he is also a pilot and flies a Beech Bonanza A-36.

He met his XYL, Dee W1MGA, in high school where he administered her Novice exam. You only had to have a General Class License to administer Novice exams in those days. A year later she got her General at the old Custom House in Boston. They have been married for 56 years and through that time they maintained car-car and car-home communications on two-meters starting with AM rigs he built. His career took him from Captain in the Army where he managed a small group of researchers at the U.S. Army Electronics Command to the faculty of Electrical and Computer Engineering at the University of Massachusetts, Amherst. His interest in designing and building computer systems led him to the Digital Equipment Corporation first as Manager of the Corporate Research Group and later as Vice President of the Information Systems and Management Consulting Businesses.

He was founder and CEO of Marathon Technologies Corporation, fault and disaster tolerant systems, retiring in 2004. Currently he works part time for Batteryeliminatostore.com that he started with his son, Scott, K1SRG, and Russ, WA1RKO/SK, designing manufacturing and selling battery eliminators and is on the Board of Directors of Interbit Data, a medical SW company.

They now have part of the Emergency Communications room in the new Fire Station with an HT on stand-by, two dual band VHF/UHF rigs, antennas on the roof and tower and a remote base supplied at a higher tower with the ARES antenna at 90 ft in the center of Stow.

His ham radio interests are QRP (mostly CW), DX, ARES, Antennas and working Field Day with the PART club in Westford, MA where he is on the Board. He has published several technical books, papers and articles including ham radio articles on subjects ranging from the first solid state 2M handheld, modifying ham gear and antennas. Currently, he is partnering with Bob, KC1DSQ, designing HF OCF antennas using their unique capacitive loads. His ham radio articles appeared in QST and CQ magazines and a joint article on OCFs with KC1DSQ is scheduled for an issue of CQ in summer 2020.