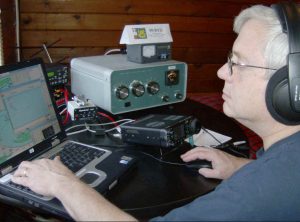 Eric has been active in Emergency Management communication leadership since the mid 1970s and is the Communications Officer for the City of Marlborough.  First licensed in 1967 as WN1HON and is an active home brewer and contester.  He operates annually for two weeks from the French island of Miquelon as FP/KV1J.  He also operates from FN44 in Maine.

Eric Co-Manages the W1 Incoming QSL Bureau and is active with the Yankee Clipper Contest Club.

His early career was as an Electrical Engineer doing digital circuit design and EMC testing.  He retired after over 30 years with Digital/Compaq/Hewlett Packard as Manager of Corporate Standards and Policies.