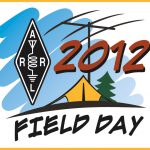 Field Day is now history. For many, it was the culmination of weeks of hard work and planning. For others, 24 hours of all-out contesting, or a last-minute decision to drop in to the local club’s site to socialize with old friends and to make new acquaintances. And for many non-hams, this last full weekend in June was their first opportunity to taste the allure and wonder of Amateur Radio.

Although I was unable to fit in all of the participating area radio clubs over the course of the weekend, I was privileged to visit personally with eleven. I wanted to share some observations and thoughts about the weeekend. 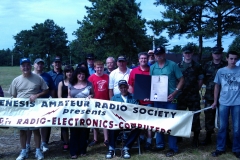 I began my travels with a visit to the folks at the Genesis ARS at the Plymouth Airport. Although I arrived at mid-morning, already twenty or so individuals were already hard at work with setup. Their club president and vice president were gracious to interrupt their activities for a few minutes to chat with me about Field Day and GARS’ activities.

Their efforts involved a number of scouts, and featured several homemade publicity displays (see photos) including one describing the ARRL, spearheaded by Judy, KB1SRO. I was most impressed! I was also pleased to hear that GARS offered a VE testing session during Field Day. 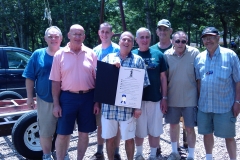 When I arrived at Camp Greeough in Yarmouthport, the folks at BARC/Explorer Post 73 ARC were also heavily involved in setting up. BARC members Rob, Mark, Tam and the rest of the gang had an elaborate 3A+GOTA operation housed underneath a large, open-air shelter. They specifically advertised for scouts and members of the general public to come and visit.

They all paused briefly as I took a group photo, holding Gov. Patrick’s official Amateur Radio Week proclamation, then it was back to work. 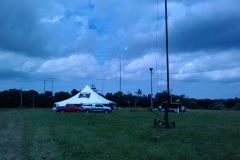 After a lunch break, I pulled into the Barnstable County Fairgrounds, the site of the Falmouth Amateur Radio Association’s Field Day site in Falmouth. Then entrance was well marked with excellent signage. FARA typically sports one of the largest and best-organized operations in the section and this year was no exception. This 2A operation also included a satellite station as well as two separate 1B operations being conducted from nearby Airstream trailers. All told, I counted six separate towers. The unique layout grouped together all operating positions in a “central hub.”

FARA president K1MGH introduced me to one of their special visitors, Jim McGuinness, the elementary school teacher who is working with FARA for the upcoming ARISS school contact from Falmouth Elementary School in October. 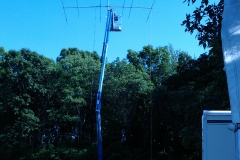 All too soon, however, it was time to head down the road to the next site. 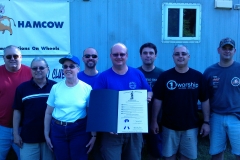 The Bristol County Repeater Association/Fall River ARC crew were set up in their traditional location in the Freetown State Forest next to a busy recreational area.

Roland, Dave, and the rest are certainly practiced in deploying the famous HamCow quickly, along with its antennas and gear, thanks to practice from numerous past Field Day and Martha’s Vineyard operations. The seasoned crew had four different operating positions on the air and buzzing with contacts. 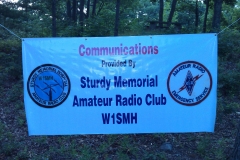 I arrived at the Sturdy Memorial Hospital ARC site in North Attleboro just as a storm was ominously threatening to hit. As luck would have it, the rains held off and only a few sprinkles could be felt.

The W1SMH crew were camped in the pleasant, wooded (and high) location at Veterans Park. They sported some nice wire antennas and towers with beams. They also employed a GOTA station that was being put to good use. I took a photo of their excellent club banner.

The crew also posed for a group photo for me, holding the Governor’s proclamation. 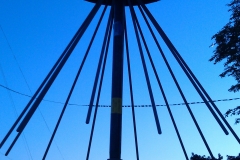 After a dinner stop, I pulled into the center of Needham and dusk, catching the crew from the Wellesley Amateur Radio Society as they were breaking off operations for the evening. Dan, Barb, and the rest of the crew were kind enough to stop and chat for a few minutes and recap their day.

Their site is situated at the Town’s gazebo situated next to the high school. W1DAN explained to me that the majority of their contacts were made via solar power. However, the group also featured a “vintage” station consisting of a Heathkit DX-60 that operated under commercial power. 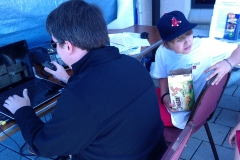 I began my Sunday visits by traveling to the Dexter School in nearby Brookline, site of the Clay Center ARC/Waltham ARA’s 3A operation. Excellent signage and directions were posted for visitors to follow.

Their Field Day featured a cool 3-element wire antenna for 40 meters, designed and built by one of the students. It was refreshing to see the younger ops dominating the event.

ARRL PIO KA1MOM had put together an impressive PR table with literature. The school’s science and technology director, K5TEC, told me that he had conducted tours for at least ten families and their children. 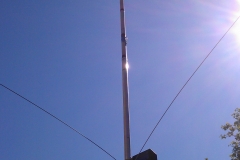 The 2A operation featured a GOTA station under a large tent. Although a skeleton crew was present Sunday morning when I arrived, the two clubs kept the station staffed all night long. The group had, in fact, weathered heavy downpours the previous evening. 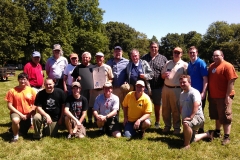 I arrived at around eleven a.m. at Endicot Park in Danvers, the traditional Field Day site of the North Shore Radio Club, NS1RA.

The various stations (including a GOTA) were busy making QSOs but I had a chance to chat with several of the folks who were “off duty” including Al, W1DUW. The group always puts on a great meal for its partipants. Safety is also very much a priority at their Field Day event. 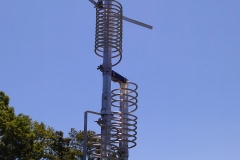 My last stop of the day was in Gloucester at the Cape Ann Amateur Radio Association’s Field Day at the Fuller School.

The group survived some nasty weather visited upon them by Murphy, as well as bad electrical noise from a nearby power line. But on a brighter note, CAARA was also visited by the Mayor of Gloucester, as well as Sen. Bruce Tarr (N1UIU).

I’d like to leave you with a few final thoughts–thoughts I expressed in a Field Day report ten years ago but which are no less relevant today.

As a group, hams can be very innovative and flexible. When equipment breaks or last-minute plans change, we take it in stride. We are adaptable.

We like to stick to plans and strategies that have worked in the past, but we’re not afraid to try new methods, either.

We’re quick to set aside the “contest” aspect of Field Day to give a helping hand to hold a rope, to hammer in a ground rod, or spend a few minutes explaining ham radio to a visitor.

We come to Field Day to be with one another. We’re sociable. We want to achieve and to accomplish.

We’re patriotic. We realize that when we invest our time and energies in this weekend event, we are making our communities and our nation a safer place to live. But above all, we genuinely respect each other, and we enjoy one another’s company. We share a mutual interest in a hobby and service known as Amateur Radio. And as a result of our efforts, the world is a little better off than it was before.