The Radio Amateur Civil Emergency Service (RACES) is a standby radio service provided for in Part 97.407 of the Federal Communications Commission (FCC) rules and regulations governing Amateur Radio in the United States.

The concept of a standby “Radio Amateur Civil Emergency Service” to replace the conventional “Amateur Radio Service” during wartime was developed in 1952 as result of input from the ARRL and the Department of the Army’s Office of Civil Defense. During World War II, the Amateur Radio Service had been silenced and a new War Emergency Radio Service (WERS) had to be created from scratch in a process that took six months.

The resulting standby RACES service was designed to provide a quicker and smoother transition in the event the President ever needed to silence the regular Amateur Radio Service again when invoking the War Powers Act of 1941. Despite four wars involving the United States since 1952, this has never happened.

When so activated, the Radio Amateur Civil Emergency Service will consist of only those amateur radio operators who have previously registered with State and local governments to provide emergency radio communications for them in times of emergency. Other amateur radio operations might be suspended and operations under the RACES rules might be restricted to certain frequencies within the amateur radio bands.In addition to wartime communications, operations under the RACES rules can provide or supplement communications during emergencies where normal communication systems have sustained damage. It may be used in a wide variety of situations, including natural disasters, technological disasters, nuclear accidents, nuclear attack, terrorist incidents, and bomb threats.

In the past, actual RACES station licenses were also issued to civil defense organizations. To prevent abuse of station licenses by officials who were not licensed amateur radio operators, limitations on the duration of non-emergency operation and stations that might be contacted were incorporated into part 97.407. Such RACES station licenses are no longer issued, and any operations under the RACES rules would now use licensed amateur radio operators as control operators.In daily practice, most amateur radio operators enrolled with their local government for possible operations under the RACES rules are also members of the Amateur Radio Emergency Service, organized by the American Radio Relay League. ARES provides emergency communications in the conventional Amateur Radio Service without the need for an emergency declaration from the government. [Wikipedia.org]

The RACES organization in Massachusetts is organized into four regions along the geographic boundaries used by the Massachusetts Emergency Management Agency. Each region RACES Radio officer is responsible for developing and providing methods for the cities and towns in their region to communicate with their neighbors and to state government through the MEMA Region Headquarters. The Massachusetts RACES organization holds regular monthly drills on the first Monday of every month except when the first Monday is a legal holiday. In that case, the monthly drills are conducted on the second Monday of the month. All cities and towns in the Commonwealth are invited to participate by sending their RACES radio officer or designee to check in. During these monthly drills, messages are passed for the local emergency managers on emergency management issues and training.  In the event of an emergency activation of RACES net operations, the nets will be on the same frequencies as the monthly drills. 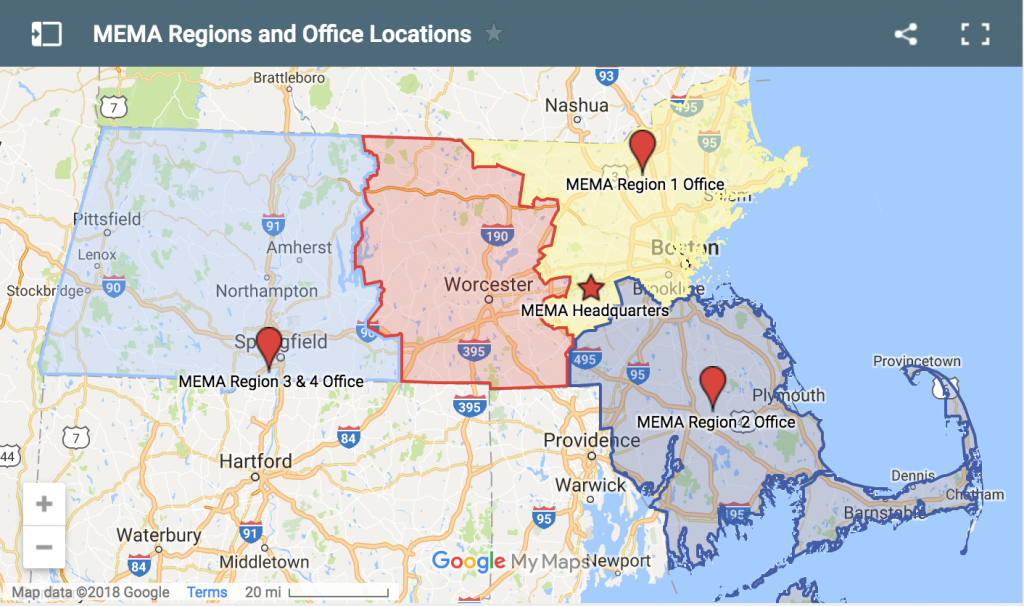 The MEMA Hq. Radio Club maintains a station on site, WC1MA.  At the present time, the station is equipped with HF/VHF/UHF radio capability.  WC1MA is active on 6 and 2-meters on during the monthly RACES drills.

Update: as of mid-March, 2018, WC1MA is currently incapable of HF operation due to storm damage to the antennas.

In Eastern Massachusetts, the Region One Office is located at 365 East St, Tewksbury, MA 01876. They can be reached via email at wc1maa@winlink.org or wc1maa@gmail.com. The WC1MAA station has the capability of operating on all bands from 75 Meters through 440 MHz. During actual events or drills, they can be contacted at:

The Region One RACES Officer is Terry Stader, KA8SCP.  [qrz/wc1maa]

The MEMA Region II Office and EOC will soon re-open at a new location in the Town of Franklin. The move is schedule to be completed in September, 2020.

For the next several months, MEMA’s Region II staff is working in conference and office space that has been provided by the Plymouth Police Department, and the REOC has been moved to MEMA headquarters in Framingham. Contact information for Region II staff and the REOC remain the same — the phone numbers for the former Bridgewater office and Regional EOC are being forwarded to Headquarters.

“The MEMA Region 2 Amateur Radio Communications Team operates out of the Region 2 facility located in Bridgewater, MA. Our region consists of much of Southeastern Massachusetts including Cape Cod and the Islands. The region is separated into four sectors each containing around 15 communities.

In some states, RACES is the predominant emergency communications program, while in others ARES is dominant. Most geographical areas encourage its members to maintain a “dual citizenship”; i.e.,  membership in both ARES and RACES/ACS.

ACS resources can be utilized in an agency on a day-to-day basis for familiarization for potential emergency response. This includes use of non-amateur frequencies (i.e.; government) for day-to-day government activities in any way related to emergency communications.   Participants in an ACS are expected to be more than just operators of radios in a ‘call me if you need me’ situation or an ‘it may never happen here’ scenario. They are skilled professionals who work as unpaid staff with the local emergency management agency to enhance its response and recovery in any possible emergency.   This includes preparation of plans, systems and personnel for response to any kind of situation or incident.” [Calif. ACS]