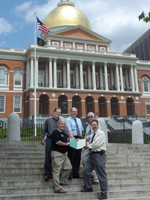 June 11, 2003 – Boston, MA – Governor Mitt Romney issued a proclamation declaring June 28, 2003, “Amateur Radio Day” this morning. The Governor made this proclamation in recognition of the more than 13,000 amateur radio operators in the Commonwealth. These volunteers play a valuable role in Emergency Communications, National Weather Service “Severe Weather” spotting and Public Service in the Commonwealth. They are involved with the Massachusetts Emergency Management Agency, several Massachusetts branches of the American Red Cross and other important served agencies.

Congratulations to all those Massachusetts “Hams” that have worked very hard to give us the reputation that made this proclamation a reality. Enjoy your Field Day with a deserved sense of accomplishment! We’d like to invite all the clubs in Massachusetts to celebrate this Proclamation and get the word out to the public about Amateur Radio. All our affiliated clubs are welcome to use the information in their Field Day press releases and any other PR efforts.

We would like to express our sincere thanks to Governor Romney and his staff for generating this proclamation and Senator Cheryl Jacques for assisting with getting the paperwork pushed through. We know that there are more than 13,000 amateur radio volunteers in this state and we’re certain they appreciate the recognition you’ve shown them. We would also like to thank Tom Kinahan and Peter Judge for their spirit of cooperation in assisting the ARRL Eastern Massachusetts Section staff with this very worthwhile project.