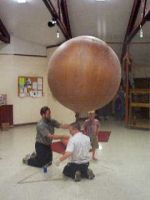 Everything is flight ready in Michigan, and Robert is monitoring the forecasts from different models. Just now he informed me that the models indicate favorable conditions TOMORROW (Friday 8/29/03), if they hold and the surface weather doesn’t prevent a morning launch. However, I fully expect this to change before tonight; that’s just the nature of this particular flight.

Robert Rochte KC8UCH of the Grosse Pointe Academy in Michigan plans to fly a “Sky Diamond” tetrahedral zero-pressure solar floater carrying one of my beacons, adapted from the HamBONE-LD series. This is our first cooperative flight, and with the right conditions it could set a new record for distance or duration, or both. Solar balloons typically fly through the day and descend slowly after sunset.

We plan to launch the balloon from near Detroit, MI at about 9:00 local time, and ballast it to achieve a float altitude around 35,000 feet, where strong upper level winds will push it east across several states. This should give many people a chance to hear the 10 meter CW signal within about 250 miles of the balloon’s flight path. Likely areas within the radio footprint include northern Ohio and Pennsylvania, New York and New England, as well as southern Ontario, Canada. Tapes or transcripts of any portion of the flight telemetry will be very much appreciated, since no single ground station will be in range of the balloon for the whole duration of the flight. Contact the tracking center using the email address included in the
telemetry.

Recovery of the beacon is not planned, and of course the landing area cannot be predicted with any accuracy. If you hear telemetry from this beacon with increasing altimeter readings, please try to DF the signal using the nulls on the sides of a beam. Since the beacon batteries will last considerably longer than the flight (at least 4 days), there is a slight chance that recovery will be possible. That is, if it doesn’t land in the Atlantic!

The remaining time in the 2-minute cycle will have a Morse “dit” and a beep of the piezo sounder every 4 seconds.