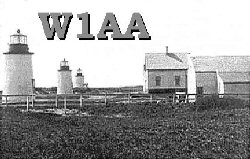 “These should be new ones for a lot of the members. Middle was last activated in 2001 and Norh and South in 2003,” writes Robert “Whitey” Doherty, K1VV.

“We will be posting our spots on the DX Summit. but we would appreciate any and all W1AA spots by the members.” He adds, “DX QSLs are via the W1 Bureau and stateside are via W1AA please with an SASE. A photo of the 3 Sisters Lighthouses will be furnished.”

“In 1837, a lighthouse station was established at Nauset Beach – halfway between the single light at Highland, and the twins at Chatham. To distinguish the Nauset Station, a keeper’s house and three small towers of brick were constructed 150 feet apart. This site marked the only station in the U.S. designated by three towers.”

–Thanks, K1VV and Rudy and Alice’s Lighthouse Page