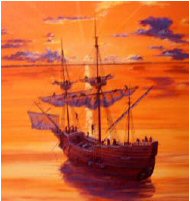 The Whitman Amateur Radio Club has produced a special edition of its newsletter, The Spectrum, highlighting the club’s special event operation from the Plimoth Plantation November 25-26, 2006.