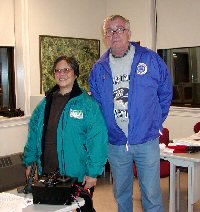 The Whitman 2006 Winterfest, held on Sunday December 3, 2006, was visited by an estimated 10,000 people throughout the day. Gallons of free hot chocolate and mounds of cookies were enjoyed by visitors while watching the ice sculpting or riding through the park in a horse drawn wagon or having a picture taken with Santa. December fire works topped off the event at 6:00 pm.

A new set of commercial hand-held radios and a base station were put in use for the first time at the Whitman 2006 Winterfest activities. This allowed town officials to monitor the volunteers reporting in to the Net Control Station.