The site is administered by Assistant Section Manager Gil Hayes, WK1H, and is powered by the same content management system software as its Eastern MA counterpart, called phpWebSite.

Congratulations to all the WMA ARRL section staff who have contributed to this fine site! 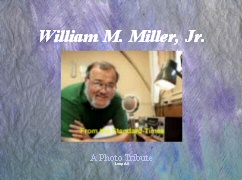 Members of the Southeastern MA Amateur Radio Association were saddened to learn that club member Bill Miller, K1IBR passed away in the early morning on February 5, 2007 following a brief illness. Funeral arrangements are private.

Miller was a driving force in SEMARA for decades; in addition to his “Elmering” efforts benefiting many in his club, K1IBR also made substantial contributions to Eastern MA section activities.

According to former ARRL Section Manager Michael Neilsen, W1MPN, “Bill was a friend to ARES; he supported our efforts to hold workshops [at SEMARA]. He also participated in the hosting of several CEMARC meetings which included complimentary BBQs.”

“Bill was the wind beneath the club’s wings more than once. This ‘silent key’ will surely be missed,” writes SEMARA member and trustee Dave Dean, K1JGV. Adds SEMARA Technical Chairman Tim Smith, N1TI, “We lost a dear friend of SEMARA today.”

The club has established a tribute page to Bill Miller on its web site at http://www.semara.org/k1ibr.html.

Upcoming events for 2007 are listed on the club’s web site at http://www.nsradio.org/events/index.htm. Contact Contact “eventnsra at nsradio dot org” (link omitted to thwart spam) for more information to volunteer for the events.

Sunday, May 6th Walk for Hunger
Boston, MA On our List to Help get them Hams… See Crocker Public Service Group

Marc Fisher, of the Washington Post, will be speaking in Andover on Thursday, February 8, 2007 at 7:00 p.m at the Massachusetts School of Law. The subject of Fisher’s presentation will be the history of broadcast radio based on his new book Radio, Rock and the Revolution that Shaped a Generation. Fisher writes The Listener, a radio column in Post’s Sunday Arts section.

Ham operators like Todd Storz, W9DYG, were instrumental in keeping broadcast radio alive when television was rapidly expanding, according to Fisher. New technology would not wipe out an old media and radio survived, ultimately changing itself and the nation. For radio aficionados this book is a must read.

The event is free and open to the public.

For more information on the book visit: http://www.marcfisher.com.

The event will take place at the 500 Federal Street address.

Air Force MARS has announced an exercise called Operation Deep Freeze 2007. It will take place on Saturday February 10th, 2007 from approximately 9 AM-1 or 2 PM. The exercise will include ARES involvement and will cover New England, the Mid-Atlantic states and the Midwest. [Full story]

….Have updated the note to include a couple of local repeaters that will be monitored during the exercise starting around 9 AM through 11 AM as well as having EchoLink/IRLP capability monitored. See text below…

Air Force MARS has announced an exercise called Operation Deep Freeze 2007. It will take place on Saturday February 10th, 2007 from approximately 9 AM-1 or 2 PM. Its range will cover New England, the Mid-Atlantic states and the Midwest (Great Lakes Region).

Amateur Radio stations will be active on HF on 3925 KHz and 7237 KHz for the exercise. Further details can be seen at the following link:

For Eastern Massachusetts, we will monitor the 145.23-Boston Repeater (PL 88.5 Hz) for any stations that want to give reports for the drill who may not have HF capability or in case HF band conditions are poor. We will also monitor the 146.97-Paxton Repeater (PL 114.8 Hz) for a path to the Western Massachusetts section in case HF capability is not available. In addition to the two local repeaters, we will also have a presence on the New England Reflector system IRLP reflector 9123, EchoLink Conference *NEW-ENG*, Node: 9123 for those who have that capability.

Steve Ewald-WV1X from the ARRL Field Organization team is coordinating ARES involvement for this MARS exericse. If you can participate, please contact me at kd1cy@ema.arrl.org with your name and call-sign and I’ll forward the information to Steve at ARRL HQ.

Thank you for your support of this drill and for your continued support of Eastern Massachusetts ARES!

Cape Cod and Sturdy Memorial ARES both have both held exercises in the past 2 weeks to improve their readiness. Each group having several EOC’s and hospitals playing in the exercise. Both scenarios dealt with poor conditions from an ice storm.

The Cape Cod ARES exercise was Saturday February 3rd, 2007 led by Cape Cod ARES DEC, Frank O’Laughlin-WQ1O. Over a dozen stations participated in the exercise. The Cape Cod and Falmouth Hospitals both had Amateur participation for the first time in recent memory. EOC’s in Falmouth and Nantucket island were activated including what George Allen-N1NBQ, Nantucket RACES Radio Offier put in a note, a once in a lifetime opportunity to utilize the $500,000 dollar Nantucket mobile communications vehicle. The Red Cross in Hyannis was also used as a base of operation.

Simplex 6 Meters, 2 Meters, Packet and a portable 440 repeater on a portable tower was utilized along with a trailer. NVIS was attempted on both 40 and 75 Meters but band conditions were too poor for it to be utilized. ARES SEC, Rob Macedo, KD1CY, observed the Cape Cod ARES exercise from Red Cross Hyannis.

The second picture shows several Amateurs at the station. From left to right is K2TGX, N1FLO, KB1DRL (foreground), W1TW hidden and N1DPY near the window. The picutre is shown below:

ARES SEC, Rob Macedo, KD1CY, participated in the exercise on the 147.195-Attleboro Repeater from home. He monitored and checked in with ARES EC John-N1FLO for any assistance they may require.

Special thanks to Frank-WQ1O and John-N1FLO for their efforts in making these exercises for their local ARES teams.

A reminder that the monthly ARES Net for February is rapidly approaching.

The monthly ARES Net for February is Monday February 5th, 2007, at 8:30 PM on the MMRA Repeater system. This is after the RACES Nets earlier in the evening.

The Framingham Amateur Radio Association‘s April 1, 2007 Spring Flea Market and Exams will feature a new twist–a “Pre-Flea Sale.” Paid-up club members will be entitled to a 15 percent discount on a large number of club inventory items.

The Pre-Flea Sale will be held at FARA on Saturday, March 10, at 10:00 a.m. So that club organizers may have an idea of attendance, they request interested parties to please e-mail w1viv@arrl.net.