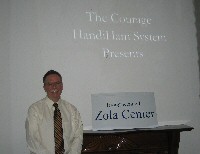 Temples spoke about the various aspects of ham radio to the audience, including amateurs’ important contributions to public service. He also described the California and Minnesota radio camps in detail.

Temples’ presentation featured the Handiham promotional video “Making Contacts… Making Friends” produced by Pat Tice, WA0TDA and directed by Gary Gordon, K6KV, followed by a question and answer session.
“The group was really fired up at the conclusion of the presentation,” remarked K9HI. “The director inquired about affiliating with the Courage Center Handiham System. And, several clients asked about the possibility of holding a License In A Weekend session at the Center. I’d say that there’s an excellent chance the Zola Center might form a ham radio club in the future.”

The Irving K. Zola Center for Persons with Disabilities at Brigham House is a drop-in community center for persons with disabilities. The center is named for Irving Kenneth Zola, a resident of Newton, MA, who was an internationally known sociologist and advocate who specialized in disability studies and medical sociology.