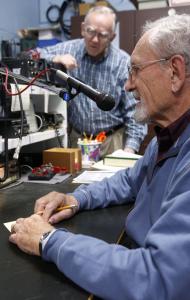 Members of the Framingham Amateur Radio Association were interviewed for a front-page article in the Metrowest section of The Boston Globe entitled Ham Radio Showing Its Gray on October 2, 2008.

Despite the less-than-positive title, the article successfully depicted the lure of Amateur Radio, the excitement of making distant HF radio contacts and the devotion to the hobby by the FARA members.

Sumner Weisman, W1VIV was featured prominently in the article. Weisman described his “first crystal-controlled radio transmitter more than 50 years ago” consisting of a single vacuum tube, and the “long wire along the roof of his house.”

Other club members described Amateur Radio as “a hobby that requires patience – as well as knowledge, training, and skill – draws a more interesting class of people than does the Web.”

ARRL Public Relations Manager Allan Pitts, W1AGP was also quoted in the story. “Ham radio is attracting new fans from two groups: recent retirees who now have the free time to scratch some longtime itch to learn radio, and young people – late teens, early 20s – who ‘are interested in the emergency communication aspect of amateur radio.'”