The Whitman Amateur Radio Club conducted a two-day special event from the Plimoth Plantation over the weekend following Thanksgiving.

Paul Burbine N1VTI, President of the Whitman Club reports that 22 area amateur radio operators set up six base stations and portable antennas at the re-creation of the 17th century Pilgrim settlement and Indian homesite and exchanged contacts with 216 other amateur radio operators in 32 States, 8 foreign countries and 3 Canadian Provinces.

The HAM operators spread the word of Plimoth Plantation over the airways, explaining about the living museum and how they found the visitors, especially the children, amazed by the actors, dressed as Pilgrims and trained to speak in the language of the time and who did not acknowledge the existence of any of our modern technical wonders as they explained about the harsh reality of early Pilgrim life.

The crew operated using both voice and Morse code and made a special contact linking the Hams in Plymouth, Massachusetts with a HAM,  Laurie Hummerstone M0VRT, in Plymouth England. The crew found amateur radio operators from all over the world eager to make contact with Plimoth Plantation. Each amateur who contacts the club station WA1NPO is entitled to receive a certificate, suitable for framing, which includes a picture of  Mayflower II, docked in Plymouth harbor, and confirms the date and time of the two way radio contact.

The adults visiting the Plantation were encouraged to send a radiogram message free of charge to friends and relatives via amateur radio. We were able to explain how amateur radio operators practice sending routine messages, via radio to amateur radio operators in the local neighborhood who pick up the phone and deliver the message free of charge. We also explained how these routine messages could quickly change to priority or emergency messages in times of National emergencies. 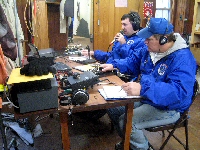