The exercise scenario, designed by Eastern MA Section Emergency Coordinator Rob Macedo, KD1CY, and other MRAS leaders, called for significant infrastructure damage to landline and cellular telephone, and loss of commercial power. EMAs were encouraged to report damage assessments to state and federal authorities as well as practicing simulated recovery operations at their discretion as a training opportunity.

The exercise utilized a wide variety of communications modes, including: RACES nets, the Echolink *NEW-ENG* conference node, the IRLP Reflector, the MEMA VHF Radio system on non-amateur frequencies for cities, towns and agencies, the MA Web EOC, and the MA Health and Homeland Alert Network. At various times during the drill, RACES nets were forced to reconvene to simplex frequencies due to simulated repeater outages. 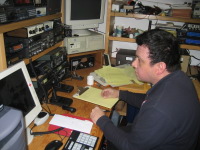 Several Amateur operators from neighboring states, including Connecticut and New Hampshire participated in the exercise as well as hams from the Maritime provinces of New Brunswick and Nova Scotia, Canada. In addition, Amateur Radio Coordinators from WX4NHC, the Amateur Radio Station at the National Hurricane Center checked in and montiored drill operations from their home locations. They extended their thanks and support to the region for conducting hurricane drill operations.