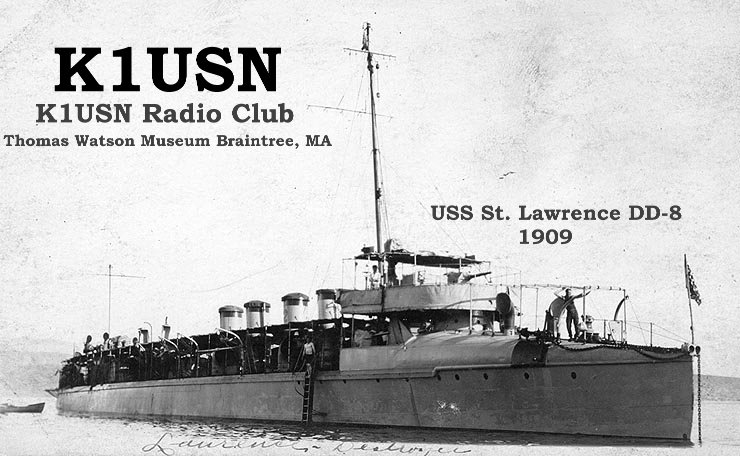 The 2011 International Museum Ships Weekend was a resounding success!

We had quite a group of operators, helpers and visitors last weekend and we were able to make close to 1000 contacts with 46 states, 31 DXCC countries and 24 participating Museum Ships! The K1USN QSL requests are already pouring in! We hope to have our new cards printed ASAP.

We arrived at 7 PM Friday evening to get the HF stations ready to go. We ran the Yaesu FT-920 and 500 watt Ameritron Amplifier on 20 meters into the Sommer yagi. It performed flawlessly.

We decided to use the Kenwood TS-690-S into the G5RV antenna as our second station and concentrated on 40 meters.

We had over 250 contacts before shutting down for the night at 11:30PM.

Many of the K1USN crew went to Jamies in Braintree at 7 AM for breakfast before heading over to operate. Saturday morning we had both stations operational throughout the day and continued to rack up contacts. Although we did some operating on 17, 15 and 6 meters we pretty much stuck to the “bread n’ butter” bands of 20 and 40 meters.

Special thanks goes to Warren, WA1YKF, for doing a fine job preparing the ends of our hardline cable run to give us the option of using the R-5 vertical which is mounted on the phone pole at the lower end of the parking lot. This enabled us to add a third HF station using the IC-746-PRO and R-5. As an added bonus we found that six meters was open on Saturday and the R-5 loaded quite well on that band, too.

BTW, we were able to work a number of old friends including several who spent many hours operating with us during previous MSW events onboard the USS Salem. Bruce, K1HTN and Norm, WA1DBR as well as former USS Salem crew member, Radar, N2GDY.

We were unable to get our vintage station operational this year, but we already have plans for some station improvements by W1EKG and KB1IIU. BTW, Bill has offered to supply a watertight box for completing the hardline installation.

Here is a partial list of those who particIpated with us during MSW 2011. My apologies for any omissions.

Here is a list of the 24 participating ships we worked this year:

One final word to mention the VE exams this Saturday at K1USN! Please contact Bill, K1WN (k1wn@aol.com) if you want to take an exam.